Boy Toy
25 June To 21 July
by William Spencer
A new dance show inspired by the classic comic ballet Coppélia. Freddie is engaged to Simon, but on his way home from his stag do he falls in love with what he believes is a beautiful young man in a window. But the young man is really a doll, its movements mischievously controlled by the strange Dr C.

Closer to Heaven
3 July To 4 August
by Jonathan Harvey with music and lyrics by Pet Shop Boys
A thrilling musical with original songs by Pet Shop Boys, set against the backdrop of Soho’s pulsing nightlife. Dave is a young dancer from Ireland. When he takes a job bartending in a Soho nightclub, he’s surprised to find himself at the heart of a new and very unconventional family.

Jenna Russell will play Francesca, an Italian immigrant housewife living a happy existence on a farm in the American Midwest. However, when her family go off to the Iowa State Fair, she meets Robert Kincaid, a National Geographic photographer on assignment filming bridges in the area. Their initial friendship develops into a brief but passionate affair which has devastating consequences on all of their lives 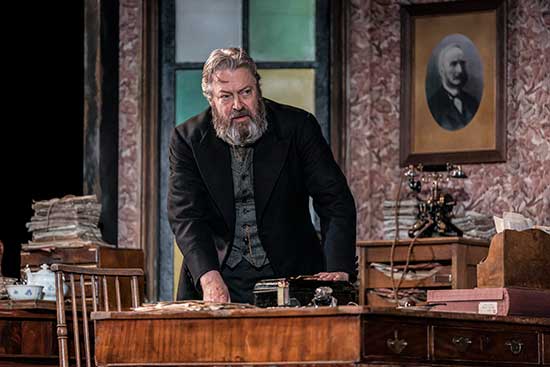 Rutherford and Son
To 3 August
by Githa Sowerby
Roger Allam (Les Misérables, The Thick of It) returns to the National for the first time in a decade to play Rutherford. Githa Sowerby’s astonishing play was inspired by her own experience of growing up in a family-run factory in Gateshead. Writing in 1912, when female voices were seldom heard on British stages, she now claims her place alongside Ibsen and Bernard Shaw with this searing depiction of class, gender and generational warfare.

Small Island
To 10 August
by Andrea Levy
An epic, Orange Prize-winning novel bursts to new life on the Olivier stage. A company of 40 tells a story which journeys from Jamaica to Britain, through the Second World War to 1948 – the year the HMT Empire Windrush docked at Tilbury.

Top Girls
To 20 July
by Caryl Churchill
Now hiring: top girls wanted for prestige positions. Must be self-motivated go-getters with an appetite for success. No timewasters. Marlene is the first woman to head the Top Girls employment agency.

Peter Gynt
27 June To 8 October
by David Hare (after Henrik Ibsen)
Peter Gynt has always set his heart on being special. When he steals the bride from a local wedding, he sets off on a lifetime journey which will take him to Florida, to Egypt, to a mountain of trolls, and finally, only when death approaches, back to his home in Scotland. In this radical new version, David Hare kidnaps Ibsen’s most famous hero and runs away with him into the 21st century.

Hansard
From 22 August
by Simon Woods
It’s a summer’s morning in 1988 and Tory politician Robin Hesketh has returned home to the idyllic Cotswold house he shares with his wife of 30 years, Diana. But all is not as blissful as it seems. Diana has a stinking hangover, a fox is destroying the garden, and secrets are being dug up all over the place. As the day draws on, what starts as gentle ribbing and the familiar rhythms of marital sparring quickly turns to blood-sport.

The Light in the Piazza
To 5 July
by Craig Lucas
Be transported to sun-drenched Italy by the London premiere of hit Broadway musical The Light in the Piazza. Set in Florence during the summer of 1953, this heart-wrenching love story invites us into the world of Margaret Johnson and her daughter Clara. As they take in the wonders of the city, a fateful gust of wind whisks Clara’s hat into the hands of local dreamer Fabrizio Naccarelli. It’s love at first sight, but Clara isn’t quite what she appears – soon they must all confront a secret that’s been kept in the shadows for far too long.

Henry IV Part I
To 11 October
by William Shakespeare
Two Harrys: Harry Hotspur and Prince Hal. Sons to enemy fathers: Henry Percy and King Henry IV. Hotspur is preparing to lead an army against the King – incensed at the King’s dismissal of the Percy family’s demands. But Hal is occupied in the pubs and streets of Eastcheap with his companion Sir John Falstaff, uninterested in his inheritance and in the fate of his country.

Henry V
To 11 October
by William Shakespeare
There’s trouble brewing between England and France… As King Henry V attempts to prove himself a worthy ruler, he brazenly lays claim to parts of France. When France mocks his claim, he leads the English forces across the Channel.

The Merry Wives of Windsor
To 12 October
by William Shakespeare
Double-meanings, disguises and dirty laundry abound as Sir John Falstaff sets about improving his financial situation by wooing Mistress Page and Mistress Ford. But the ‘Merry Wives’ quickly cotton on to his tricks and decide to have a bit of fun of their own at Falstaff’s expense…

Afterglow
To 20 July
by S Asher Gelman
Josh and Alex are a married couple in an open relationship. But after young Darius shares their bed for a night, a new intimate connection begins to form, and all three men must come head to head with one another’s notions of love, intimacy, and commitment.

The Sandman
14 To 29 June
by Harry Blake and Jennifer Fletcher
The Sandman is a brand new musical thriller about friendship, art and the supernatural, loosely based on the short story by E. T. A. Hoffmann. Nat, a talented fashion designer, is stalked by the figure of the Sandman, a character from her childhood mysteriously connected to her parent’s death. As the Sandman strengthens his grip on Nat, reality and nightmares begin to blur.

Fiver
3 To 20 July
by Alex James Ellison and Tom Lees
A new musical by Alex James Ellison and Tom Lees, follows the story of a humble five pound note as it passes through the hands and pockets of people in London. Often unnoticed and obviously unaware, the fiver is present for significant moments in each person’s life – whether it be an appreciation of their skills as a street performer; the start or end of a relationship; or the simple realisation that they can afford a bed for the night.

Once On This Island
9 To 31 August
by Lynn Ahrens, music by Stephen Flaherty
Once On This Island is a captivating calypso-flavoured re-telling of the Little Mermaid fairy tale. The story begins on a Caribbean island where villagers comfort a little girl with the legend of the romance of the peasant orphan Ti Moune, and a rich city boy whom she saves from death.

Present Laughter
17 June To 10 August
by Noel Coward
As he prepares to embark on an overseas tour, star actor Garry Essendine’s colourful life is in danger of spiralling out of control. Engulfed by an escalating identity crisis as his many and various relationships compete for his attention, Garry’s few remaining days at home are a chaotic whirlwind of love, sex, panic and soul-searching.

A Very Expensive Poison
From 19 August
by Lucy Prebble
A shocking assassination in the heart of London. In a bizarre mix of high-stakes global politics and radioactive villainy, a man pays with his life. At this time of global crises and a looming new Cold War, A Very Expensive Poison sends us careering through the shadowy world of international espionage from Moscow to Mayfair. 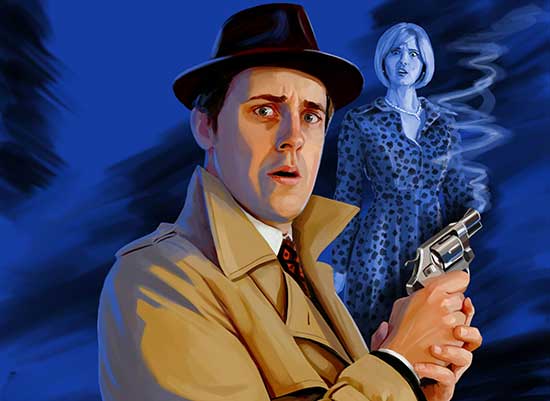 The Falcon’s Malteser
20 July To 25 August
by Anthony Horowitz
Acclaimed stage version of Anthony Horowitz’s hilarious novel introducing the Diamond Brothers Detective Agency. Tim is the world’s worst private investigator, so can the help of his clever younger brother Nick be enough to crack their toughest case yet? A solitary box of Maltesers is delivered by a miniature Mexican, but what’s so special about these chocolates that half of London’s criminal underworld are willing to kill for them?

Red Palace
from September
Creative Producer Laura Drake Chambers
A new immersive cabaret experience conjured from the darkest, most beguiling and magical folk tales. RED PALACE is a night of feast and fantasy, glitter and doom, within a Gothic masquerade that breathes new life into our most beloved fairytale characters, all fit for a beastly ball.

Death of a Salesman
To 13 July
by Arthur Miller
Following her recent award-winning success for Company and Angels in America, Marianne Elliott co-directs with Miranda Cromwell, bringing a unique vision to one of the greatest plays of the twentieth century, seen through the eyes of an African American family. Wendell Pierce (The Wire, Suits, Selma) makes his UK stage debut as Willy Loman.

Bronx Gothic
To 29 June
Written and performed by Okwui Okpokwasili
Part theatre, part dance and part visual art installation, Okwui Okpokwasili’s Bronx Gothic delves into her memories of growing up in the Bronx, before emerging into a breathtaking exploration of girlhood.

Tree
29 July To 24 August
Created by Idris Elba & Kwame Kwei-Armah
Idris Elba and Kwame Kwei-Armah’s electrifying new blend of drama, music and dance follows one man’s journey into the heart and soul of contemporary South Africa – with the audience at the centre of the action. It’s just 12 hours from London to his parents’ homeland, but to Kaleo (Alfred Enoch), South Africa is another world. When a family tragedy finally forces him to visit for the first time, Kaleo must confront hidden histories and right the wrongs of the past.