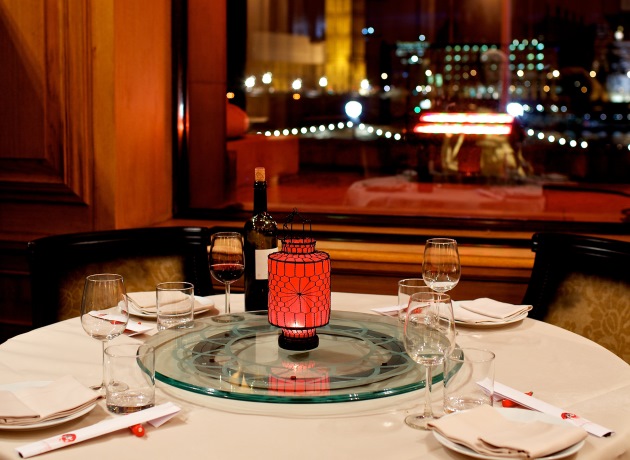 you know when you walk into a place and it just feels right, instinctively you just know ‘it’s all good’? That peaceful, natural easiness. Well, that’s Zen.

Zen China is a five-star experience of ‘authentic’ Beijing cuisine, presenting traditional dishes that you might find in Chinatown. Here, however, they are served by an attentive team on immaculate tables with views over the Thames, the Houses of Parliament and Big Ben.

This restaurant, though in a prime position, is discreetly signposted and a little challenging to find, but like most of the best things in life doing so is worth the effort. To find it you will need to locate a set of steps leading up to a semi-circular garden raised above the riverside walkway, at the foot of the imposing County Hall. Around this tranquil garden you’ll find herbs and vegetables growing – including mint, coriander and thriving cabbages – as well as the doorway into Zen China.

Michael Si, the ever-personable young Maître D’ gave us a brief introduction to the history of the restaurant and its philosophy when we spoke with him during dinner. Gentle stringed music played in the background and through the windows the London skyline and flowing river added to the faraway calm inside. 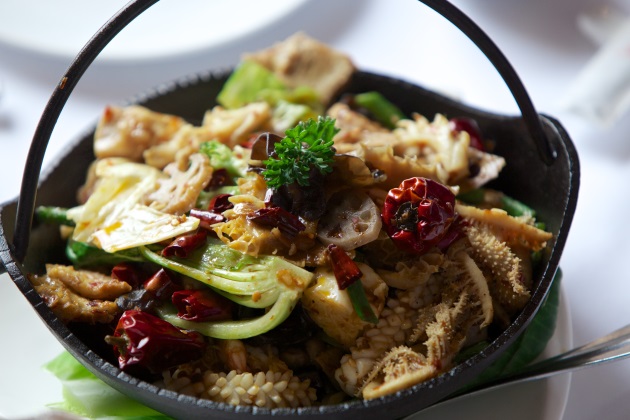 We started with a fresh Sauvignon Blanc from New Zealand. It was cool and crisp and as I sipped it and looked out the window, I could see the end of day commuters scurrying over the bridge in both directions amongst cars, taxis, coaches and buses of every colour. It was a relief to be inside.

The first course, a treat of Salt and Pepper Spare Ribs, Steamed Scallops with Glass Noodles in Seashells, Salt and Pepper Squid and a Tempura Crispy King Prawn with a Shredded Potato Wrap, was delicious. Michael explained that their seafood was delivered fresh every day from Billingsgate Market while their chef, Mr Zhu, had been flown in this year from a famous 100-year-old restaurant in China to deliver classic favourites from the Far East. It was no wonder that so many of the other diners were Chinese, enjoying their own personal favourites in a most comfortable London venue.

Outside, the sun had just dipped and the light was slipping away. The warm day was becoming a cool evening. 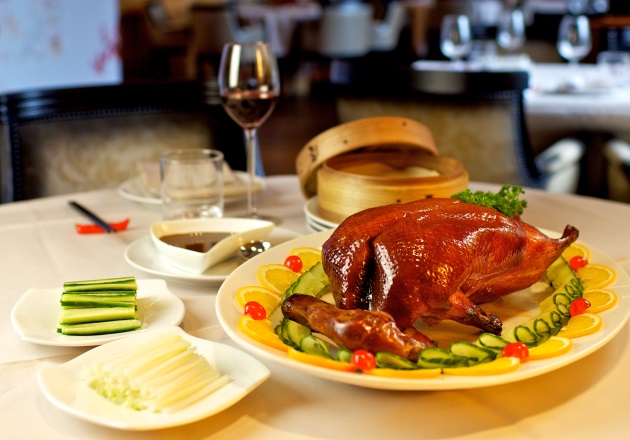 The next ‘in-between’ course was Zen China’s signature dish: Traditional Beijing Roast Duck with hand-made Pancakes. The crisp skin was skilfully carved off and served separately to be dipped into either a plum sauce or a small dish of sugar. The strong red colour was from the syrup applied before cooking and there were hints of aniseed too. The rest of the duck was not shredded like Peking Duck but sliced at the table and plated, ready to be assembled and rolled in the pancakes. It was moist and full of fabulous flavour.

When I looked around at the other people eating near us, everyone seemed to be utterly engrossed in their food. A young, beautiful Chinese couple ate quietly and deliberately, almost in slow motion. Hands, holding chopsticks, moved unhurriedly to pick up the colours, flowers and flavours and return them to silently parting lips. The waiting staff, with a service-style so unobtrusive, had cleared our table and I had barely noticed. Another course of food had arrived, wine glasses were topped up.

“Each mouthful of spice and texture took a different direction

On the table was a small cast iron wok containing a Mixed Seafood Hot-Spicy Pot otherwise known as ’13 Spices’, which had been highly recommended. This was a fabulous centrepiece, full of Lotus slices, Chinese Mushrooms, Broccoli and lots of heat, where each mouthful of spice and texture took a different direction. It was served with rice (of course), Classic Kung Pao King Prawns and two plates of vegetables, steamed and quickly stir fried. The parts of the duck not used in our ‘in-between’ course were served up now as Salt and Pepper pieces. Nothing was wasted, everything was tastily turned to good use. 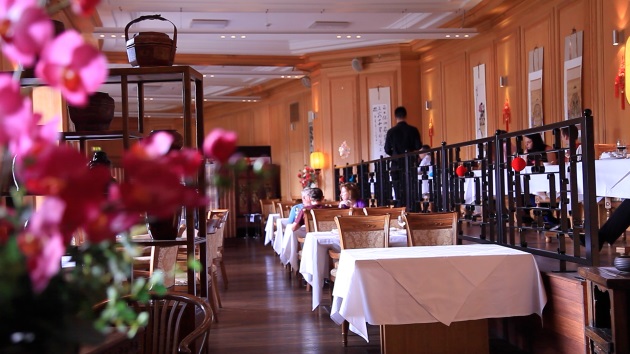 This had been a very special evening in a marvellous setting and with wonderful views. The light had changed once more outside, darkening. A solitary camera-flash winked from the bridge as a London visitor tried to capture the view up river. The lights along the riverside twinkled in the blue night. It was late evening, the commuters were gone. A red bus headed north toward the West End and a boat glided magically into the darkness under the bridge.

All had become still. All was calm and very Zen.