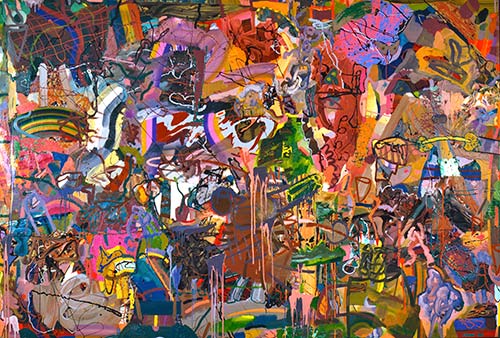 Along a connecting road in Lambeth, behind the large door of a double fronted Georgian townhouse and at the far end of an untamed garden, is the studio of David Taborn.

Taborn’s pedigree is indisputable. The title of his 1991 seminal painting ‘Factual Nonsense’ was used by the late Joshua Compston as the name of the gallery he opened in Shoreditch, at the heart of the art scene around which the Young British Artists (Damien Hirst, Tracey Emin, Gavin Turk etc) were busy making waves and headlines. Compston, whose family were already collectors of Taborn’s work, also held a series of ‘happenings’ including “A Fete Worse Than Death” in Hoxton, east London. 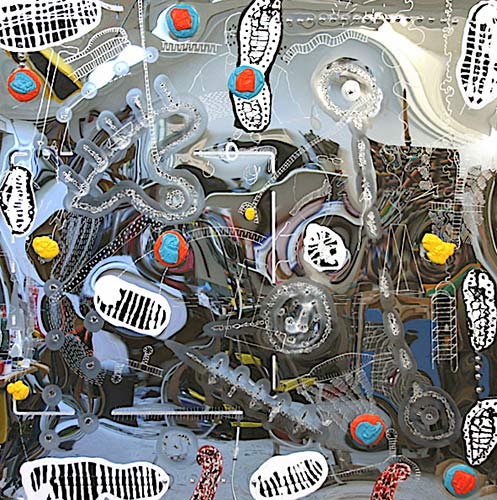 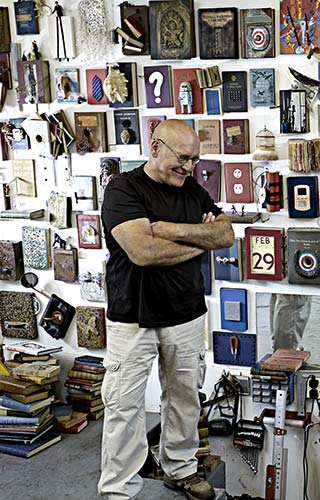 Taborn, completed his post-graduate from the Slade School of Fine Art in 1972, working and exhibiting around the country since then. By the time the YBA graduates were putting on their “Freeze” shows in London warehouses, Taborn’s style and output had matured into canvases full of explosive colour, form and material. Paint is dripped, poured and brushed with an apparent rapid randomness; the energy and aesthetics are vibrant and thrilling, while each of the finished pieces maintains a rigorous level of control and resolution. 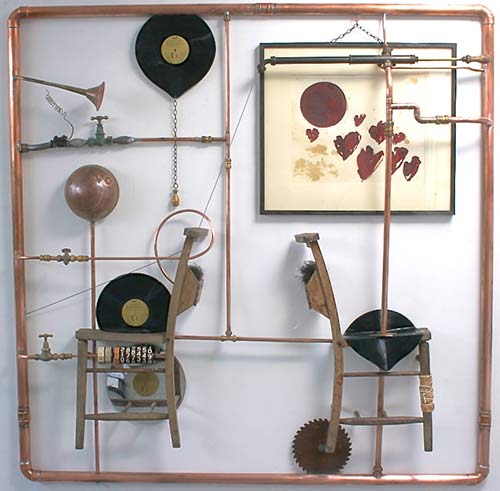 As we browse the studio the conversation occasionally touches on work materials and processes but more often he shares irreverent anecdotes from a diverse life. Observations about relationships, recollections of events, the turns and twists of fate that steered him this way or that. My own life is not out of bounds either. Taborn is not so self-obsessed that his work, his life, must be front and centre stage. Nor is he a ‘bourgeoisie’, he is not establishment. He has not become a ‘brand’, controlled, packaged and sold. He does not take anything too seriously. He is as fascinated by my life, my successes and failings, as he is about his own. This is the egalitarian stuff of his work; the humour, the absurd, the childish, the unpretentious. The marks he makes with pen, pencil, brush or anything else for that matter, may not capture a photographic resemblance of reality but they are real emotional responses to life and memory, executed with a craftsman’s skill. The work has power, impact and substance. Marks are at times fast and guttural, vivid and hurtling in all directions, while other elements on separate planes and depths within the layers of work, are meticulous, detailed and refined. 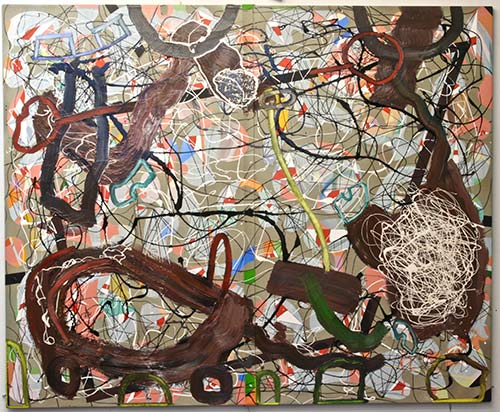 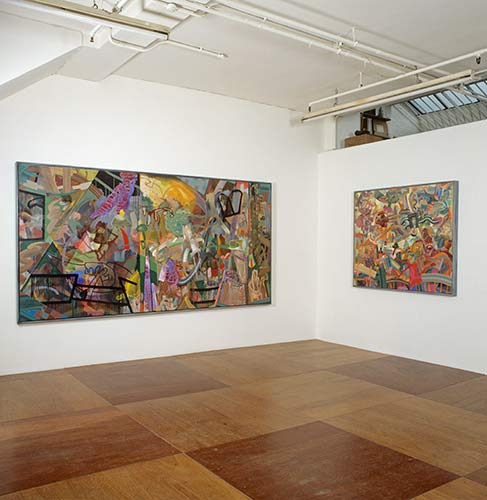 While I browse the wall of books Taborn calls his ‘Dado Rail of Delusion’, each of which he has re-fashioned into a statement, frequently witty or dangerously close to the knuckle of political correctness, homemade pizza and beer are brought in. Eating in the middle of the room, the slices of pizza seem to echo the paintings; strings of melted cheese, Winsor Yellow stretching from teeth to hand, blobs of Cadmium Red tomato dripping to the studio floor. What is it about artists, how the mundane things of life around them begin to take on other significance? Each time I slide into a relaxed, informal mindset I am eventually, and suddenly, pulled out of it again when my eyes catch another striking item.

“I like to feel I can climb into the painting 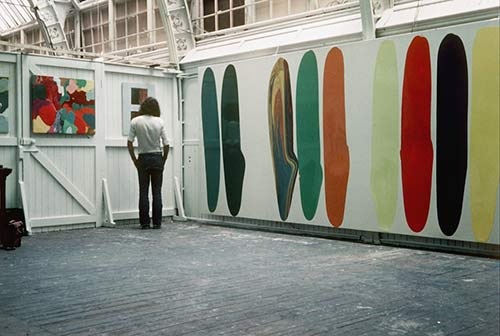 Standing in front of one of his latest creations, ‘No Words For…’ I lean back and comment on how some of the smaller graphic details part-overlaid with heavier, darker brush strokes suggest a profound depth. ‘Yes,’ Taborn answers, ‘I like to feel I can climb into the painting,’ he says, making gestures as though he were pulling aside the foliage of a rainforest, stepping through undergrowth. 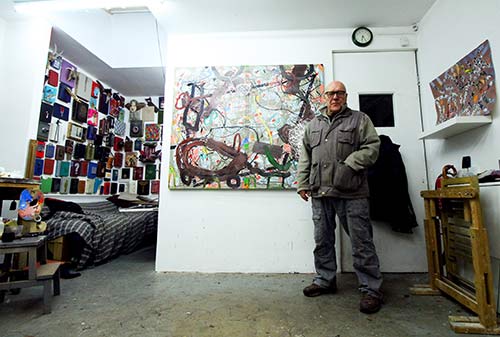 The colour palette is now cooler, subtler, than his work in the 1990s – perhaps reflecting the urban jungle he inhabits today. Since the painting days of Factual Nonsense, Taborn has explored other media including experimentation with glass and neon during his time in New York after his NESTA Fellowship, and made objects involving grinding, routing, burning and casting. More recently, in 2018 Taborn received an Award from the Gottlieb Foundation, one of a series of prestigious international awards he has won which, as he says, ‘enabled me to continue to enjoy the relative indifference of the art market to my art.’ This has given him the opportunity to pursue what he calls ‘his deep-seated lust for the sensuality and immediacy of pure painting.’

When I leave, across the garden in the dark and along a trail of stepping stones, past rabbit and guinea pig hutches, back through the house and out onto the busy streets of south London I feel charged by the encounter. This was an event, a journey, an expedition, a discovery of something unexpected. David Taborn is an explorer, not only of Lambeth and a world beyond, but of the world within; of the imagination.