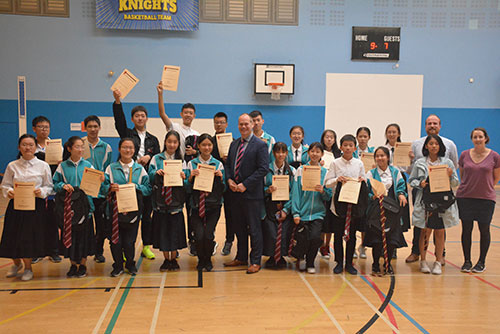 In 2005 just 8% of secondary schools were offering the subject and, by last autumn, that number was only at 13%. At the Croydon academy though, the subject is flourishing with students taking courses leading to both the GCSE and more advanced levels.

The school, which is based on two campuses – the South at Cumberlow Avenue and the Upper at Spurgeons Road – is part of the Harris Federation, the most successful academies trust in England. The Federation believes in as much access to the language as possible for all age groups from 4 to 18 in its schools and aims to develop provision at both primary and secondary level.

Students learn from the very basic to a very advanced level, taking both GCSE and Pre-U (A-Level) equivalent. Some students will also be moving on to study Mandarin at university, having studied the language for the full 7 years. Mandarin is taught for 2 lessons per week in Year 7 plus another language for 2 lessons, choosing a single language at the end of Year 7.

At this point, they will study for 4 lessons per week and 6 lessons per week in the Sixth Form. A number of topics include food, school, foundation knowledge for studying Mandarin, the environment, relationships and social media. Three teachers are involved with the different year groups, while the school also regularly trains teachers – some 8 teachers in the past 3 years.

Harris South Norwood is also one of the leading schools behind the SWIRE Chinese Language Centre London – backed by the Swire Chinese Language Foundation – which is a teacher-sharing scheme.

James Stagg, the Federation’s Mandarin Consultant, says: “We want to expand high quality provision and education in the language and culture of China to as many students as we possibly can, integrating the language as a central part of the Languages curriculum, on a par with other languages such as French, Spanish and German.”

The school partners schools in China in the cities of Suzhou and Xi’an. A trip is currently being planned for 30 students next year following a previous visit to Beijing. Meanwhile, it recently hosted a week-long visit from a party of 13 to 17-year-olds from a school affiliated to Shandong University. The group – pictured with the school’s Executive Principal Nick Soar (centre) – attended classes and took part in sports and cultural events.

To celebrate its China connections, the school will be holding a Mandarin Evening. The event takes place at the school’s South campus from 6.30pm to 8.30pm on Thursday, October 11. Guests will include representatives from Chinese education and business and parents – particularly of 2019 intake students – are welcome to come along. The informal evening will showcase the school’s Mandarin teaching and Chinese culture, food and drink.