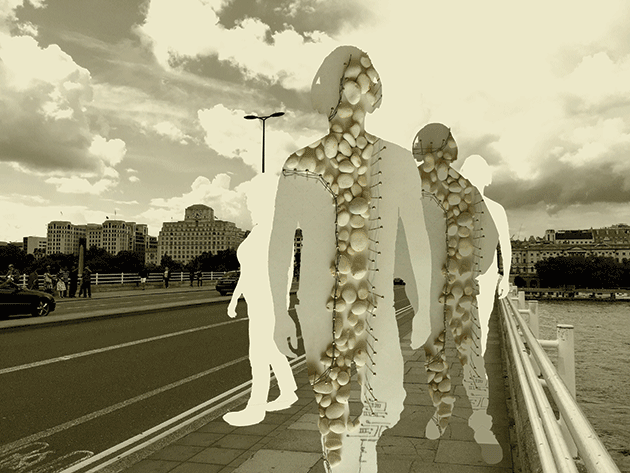 Floating Dreams by Ik-Joong Kang
A major London installation by Ik-Joong Kang, one of South Korea’s most renowned and celebrated multimedia artists, ‘Floating Dreams’ is a large-scale installation situated in the centre of the River Thames by the Millennium Bridge in London. The three-story-high lantern structure acts as a memorial to the millions displaced and divided during the Korean War (1950-53).
Thursday 1 – Friday 30 September
Bankside, adjacent to Millennium Bridge
Price: Free 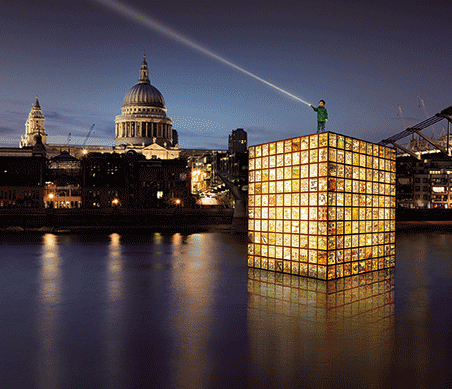 Cyril de Commarque: Fluxland
Fluxland is a new interactive artwork, sound piece and space for debate by French artist Cyril de Commarque. A 25-metre long former freight boat mounted with a mirrored polyhedron sculptural form, Fluxland will navigate along the Thames on a series of journeys over the course of the month, as a travelling visual and sound installation.
From 7 September
Various locations, River Thames, London
www.fluxland.co.uk

Life Afloat
It is estimated that over a thousand people live afloat on the Thames between Teddington Lock and the Thames Barrier. These floating villages have a rich and, until now, untold history. Based on photography, archive research and oral history interviews, this exhibition draws together the past and the present, tracking the evolution of houseboat life on one of the world’s most vibrant rivers. Photography by Katherine Fawssett and film by digital:works.
Thursday 1 – Friday 30 September
Watermans, 40 High St, Brentford, Middlesex TW8 0DS
Price: Free

Tide Line Thames
Anne Krinsky’s installation of paintings, photographs, digital prints and projections takes as its subject matter the shifting riverscape and its architectural structures – embankments, piers and river stairs – between the Thames’ high and low tide lines. The artist began the project by photographing the river and its embankments over a six-month period.
Thursday 8 – Sunday 25 September
The Gallery, Thames-Side Studios, Harrington Way (off Warspite Road), SE18 5NR
Price: Free

Sail Royal Greenwich: Tall Ships
For four days this September around 50 Tall Ships will be back in London for your viewing and cruising pleasure. Visitors can admire the ships cruising majestically along the river and be wowed by fireworks every evening after dark.
Thursday 15 – Sunday 18 September
Price: Cruise tickets from £39.90

Foreshore Walks
Join one of our archaeological walks and see the remains of Tudor jetties, a Bronze Age bridge, an Iron Age fish trap and prehistoric landscapes, as well as mesolithic trees and more.
Saturday 3 – Saturday 24 September
Price: Free to £9 plus booking fee

Thames River Watch Big Count: Litter Count & Clean-ups
Join Thames21 to tidy up one of London’s biggest litter hotspots. As well as cleaning the site, we will be leading a count to uncover where all the litter is coming from. This event is part of our Thames River Watch Big Count.
Saturday 10 & Sunday 18 September
Fulham and Isle Of Dogs
Price: Free

Firing on the Foreshore
Watch pottery being produced as it was thousands of years ago, in open fires on the Thames, explore the historic foreshore, see and handle objects dating from the end of the last Ice Age. Join leading archaeologists Dr Fiona Haughey and Mike Webber and have your questions ready for them!
Saturday 10 September
Thames foreshore, Bankside, SE1, adjacent to Shakespeare’s Globe
Price: Free

Kids’ Choir and Sing for Water
Enjoy an afternoon of singing at The Scoop as a colossal choir of over 450 primary school children sing as one in Thames Festival Trust’s Kids’ Choir. A mass UK-wide adult choir will then come together to Sing for Water raising money for WaterAid.
Sunday 11 September
The Scoop at More London
Price: Free

Tower Beach Open Day
The ever popular archaeology event returns, offering a unique opportunity to enjoy the Thames foreshore by the Tower of London. Join Thames21 and Thames Discovery to uncover the history behind the many ancient objects to be found on the foreshore.
Sunday 18 September
Access via Queens Staircase, The Tower of London, London EC3N 4AB
Price: Free

Dine by the River
Totally Thames has teamed up with some of London’s best riverside restaurants to offer opportunities to Dine by the River for less. For the whole month of September Dine by the River restaurants are offering special set menus to diners.
Riverside restaurant partners include Sea Containers at Mondrian, Kaspars at The Savoy, Skylon, Cantina del Ponte, Butler’s Wharf Chophouse, The Narrow, The Battersea Quarter, The Gun and The Perkin Reveller. Also, to celebrate the start of Totally Thames 2016, Tom Aikens will be hosting an exclusive four-course dinner at Tom’s Kitchen St Katharine Docks on Thursday 1st September.
Various locations
1-30 September