though a less established hang-out than its more commercial neighbour South Bank, Bankside has a rich and exciting history which can be felt in its cultural atmosphere today. Running to the east of South Bank from Blackfriars Bridge to London Bridge, Bankside’s wonders are easily reachable by bus, on foot, or train and tube via London Bridge, Waterloo, Southwark and Blackfriars. And the completion of the extension of Bankside Pier this June means more boats will be transporting Londoners and tourists to the area. 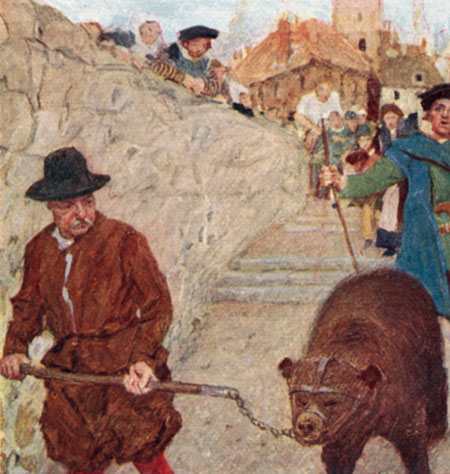 Shakespeare watches on as a bear is led into the fighting pits. Painting by William Hatherell.

According to historian John Constable, in the 1500s and 1600s Bankside gained a reputation as a “hotbed of creativity, dissent and loose living”. Renowned as the home of The Globe Theatre, the area inspired not only Shakespeare but the likes of Dickens and Blake – and has hosted a number of other historic theatres such as The Swan, The Hope and now renovated Rose Playhouse (on Rose Alley). 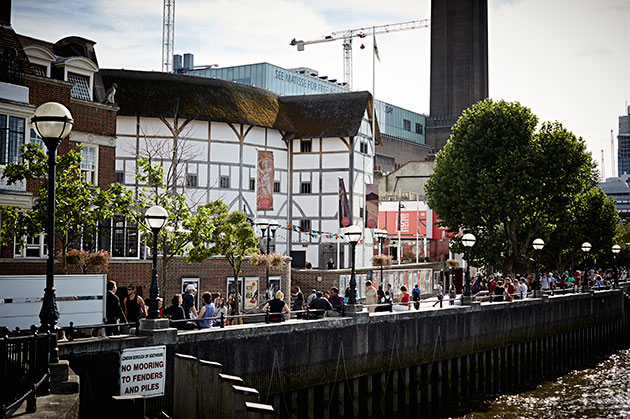 Along with the theatres and pubs, Bankside’s location outside of the City of London’s authority allowed an underworld of brothels, bear-pits (now Bear Gardens) and the Clink Prison (now a museum on Clink Street) to blossom. In 1535 King Henry VIII declared that the Bankside brothels were rife with “unclean persons unfit to associate with honest men” and should be “publicly and entirely suppressed”.

Through the late 18th and 19th centuries Bankside’s central river location became a hub of industry, home to warehouses and docks. The Power Station was designed by Sir Giles Gilbert Scott – the architect known for his work designing many of the K-series red telephone boxes and built in 1891, closing in 1981 due to rising oil prices. It was not until 1994 that the Tate Gallery acquired the site, opening Tate Modern there in 2000. 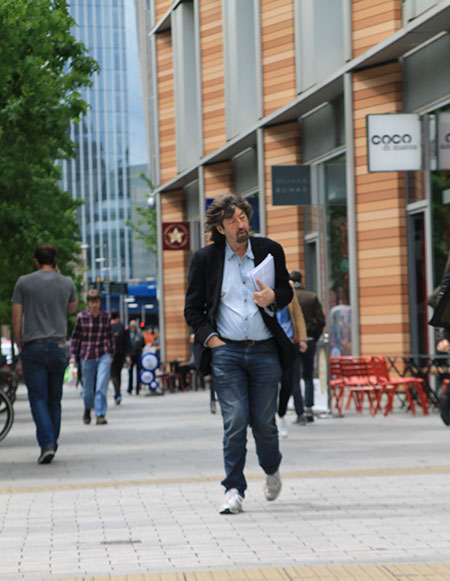 Trevor Nunn, one of our best known creatives often seen with another script in hand on Bankside

Today, Tate Modern – and its proximity to Shakespeare’s Globe and the Millennium Bridge – has made Bankside the cultural centre it is in 2016. Housing works by Warhol, Matisse and Picasso, the building’s history is not lost – particularly in the Turbine Hall (once holding an electricity generator) and The Tanks (three large connected underground oil tanks). Ever-changing, the new Tate Modern extension building opens on 17 June. The first three weeks after opening will be marked by free live art performances, including Tania Bruguera’s Police on Horseback installation (it does what it says on the tin).

Art and culture is also present outside of the gallery – on the streets of Bankside. One example is MERGE Bankside, an immersive arts festival based on the idea that ‘people living and working in Bankside wanted to keep a local community-feel despite regeneration in the area’, according to its crowdfunder campaign. Scheduled to run for a sixth year from 23 September – 23 October, MERGE aims to profile Bankside’s heritage and culture by holding events and installations around its unused spaces and historic sites. In 2014, the festival featured artist Alex Chinneck’s ‘A pound of flesh for 50p’ – a life size building made from wax that melted to the ground during the festival, designed to celebrate the history of a candle making factory which stood in Bankside 200 years ago.

Bankside’s cultural scene and stunning riverside location has led an array of businesses to set up camp in the area. The media sector around Bankside is particularly fast-growing, from the Financial Times on Southwark Bridge to Time Inc. (previously known as IPC Media, the publisher of magazines such as Marie Claire and NME) operating from the Blue Fin Building, designed by the architects of the Royal Festival Hall New Building and the BBC Media Village. Around the corner from the Blue Fin are the luxury penthouses of NEO Bankside, a fitting addition to the increasingly buzzing professional vibe of the area. Situated directly behind Tate Modern and overlooking the river, prices start at close to £6 million-a-pop.

The increase in creatives and professionals alike working in the area has brought with it an eclectic mix of restaurants and bars. As well as its classy shopping arcade and health club, a taste of Spain can be found at Camino, followed by a draught beer or expertly made cocktail in the chic surroundings of The Refinery, rounded off with a walk along the waterside and those summer evening views.

The Swan Restaurant and Bar
Set over two floors with stunning views and nestled alongside The Globe this is a location that has to be experienced. Private dining and parties are possible. Theatre menu available from midday to 3pm and from 5pm to 6pm, three courses from £24.50.

Camino
All day tapas served until late and a ‘Feast Room’ upstairs with whole suckling pig, slow-roasted Segovian style available and a weekend deal of Bottomless Brunches; tapas with bottomless cava for £25 per person.