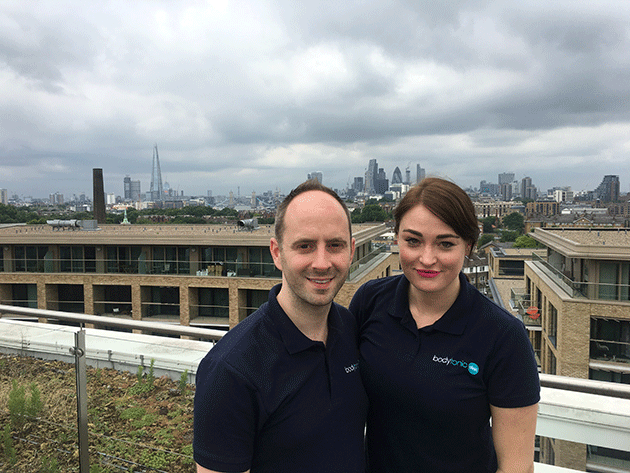 Canada Water and Surrey Quays is changing. What historically has been an often overlooked corner of south London, tucked in the bends of the river at Rotherhithe, is beginning to find its feet.

The elegant Canada Water Plaza with overground train links to Clapham, Highbury & Islington and Croydon plus the Jubilee underground line linking it to Canary Wharf in the east and the West End too is still to be discovered by many who jostle for air in other nearby parts of town. The business community too is fast becoming richer and bolder with every change of season and the Canada Water Masterplan is steadily moving forward to bring further change and development.

Young entrepreneurs have found it an excellent place to start a business and the community is thriving in all sorts of ways. We spent a little time with the two driven people behind bodytonic clinic, to discover what paths they took that led them here.

James Gill’s Story
Originally from a farming family in Norfolk, James came to London in 2002 to study at the British School of Osteopathy, moving to Canada Water in 2004 – for the residential benefits it afforded in central London and its fantastic transport links. Graduating in 2006 with a degree in Osteopathy, James began working in and around the city at various centres putting his expertise into practice and also getting an insight into a variety of business operations.

Before long he had developed his own client base in Canada Water, Stratford and Wapping and it was at Canada Water that he first worked with Sheena, “We had the same understanding for business and the same enthusiasm for the treatments,” explained James.

The couple continued to work together and also separately on their own projects; James eventually establishing his own practice in Canada Water which by 2013 had become such a success he began taking on associates. The following year, when looking for an holistic therapist, he and Sheena crossed paths once more and their collaboration resumed, creating the bodytonic clinic.

James leads the clinical practices at bodytonic clinic while Sheena’s passion for health and beauty has helped the business grow in strength every year.

“We have both put in long hours, lots of hard work – which at times has been difficult and testing, and we have learnt a great deal along the way,” James admitted. “But now in 2017 the team has grown to eighteen members of staff.”

“We have great support from local businesses, residents and patients and enjoy providing the community with a mix of great service and treatments.”

After qualification she worked for a two further years in South Africa, and moved to London in 2005 where she started at a salon in Canada water. This is where Sheena first met James. She continued working at the salon for several years and built a strong client list, in addition to freelancing at several salons and luxury 5* spas.

“This was all great research and a solid foundation for starting up my own salon,” said Sheena.
“In late 2014 James and I reconnected and bodytonic clinic is the result of our combined passions.” Together they provide a ‘one stop shop’ for structural treatments and emotional well-being support.

“James has built a great team of people and I feel really privileged to be a part of the business,” Sheena admitted.

Clearly this duo are exceptionally driven and level-headed which, combined with their hard work, is proving to be a very healthy mixture.