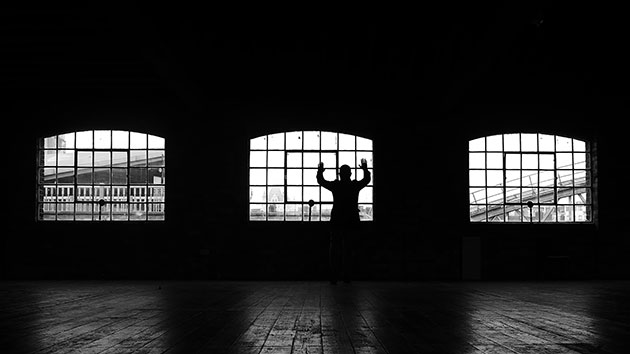 in light of the EU Referendum, the topic of Europe – and in particular immigration – has been the talk of the town. A debate full of conflicting facts and figures from the Leave and Remain campaigns, scenographer and architect Andreas Skourtis felt inspired to give Londoners something a little different to think about.

Greek-born and London-based, Skourtis’ fascination with the media term ‘EU immigrant’ led him to explore the narratives within the Europe debate in his work. Skourtis uses different architectural spaces in order to make scenography; the art of creating performance environments. His project ‘EU Immigrants EU Citizens’ comes in three chapters, and has used scenography to create metaphors to encourage audiences to think about the debate in new ways. The first chapter involved a walk on the Millennium and Blackfriars Bridges, where participants listening to a soundscape based on their surroundings were taken on a “short journey in which thoughts about longer journeys are shared”.

Hosted by Ugly Duck – Bermondsey’s historic Victorian tannery turned contemporary event and arts space – the third and final chapter of Skourtis’ project uses the building as a metaphor for a country. With the building initially ‘introducing itself’ to the audience via headphones, participants are taken to view and participate in an array of short performances throughout the building. The EU Referendum is mimicked with props such as boarding passes and ballot boxes.

Speaking of his motivation for the piece, Skourtis explains; “This project seeks to widen the dialogue beyond issues such as money and the economy… Anything to do with humans and emotions is totally neglected in the EU debate”. It is this kind of creative thinking and connecting of the arts with social, political and environmental issues that Ugly Duck seeks to foster.

‘Chapter 3: The Building’ of Andreas Skourtis’ EU Immigrants EU Citizens project will be held on 18th-19th June at Ugly Duck.