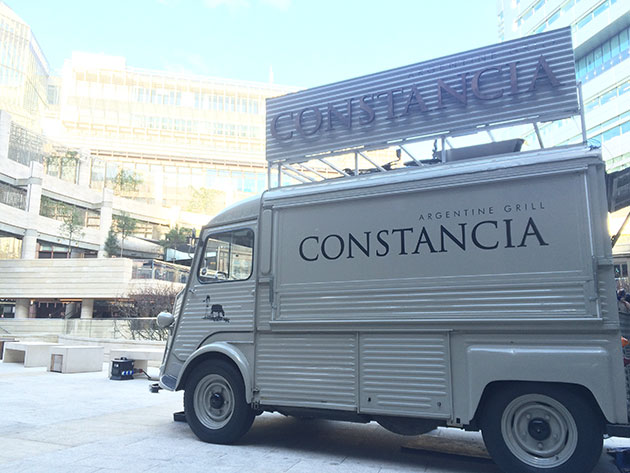 perhaps shaped in recent times by the demands of ethical festival goers, the tastes and quality of food served up from shabby vans has evolved. Mobile ‘foodie teams’ now harness social media to promote ‘happenings’, and offer more than just quick stomach fillers, but a party on wheels.

Street food has not always been known for sophistication – though surely everyone has a fond memory of a pie at a sports event, a hot dog at a fairground or just a bacon sandwich and cup of tea at the side of the road. This style of eating is relaxed and informal; there are no tablecloths and no standing on ceremony. Maybe it’s this care-free indulgence that tasted so good and, packed with memories of the moment, elevated the food into a positive emotional experience.

As tastes have become more varied it’s not uncommon to see a salad bar on wheels, a veggie burger or smoothie van. Pop up restaurants are fun, they have developed loyal customers (almost like fans) that follow the ‘brand’ on social media to find out where its appearing next as though it were an event and destination itself.

Even the capital’s best Argentinian steak (found daily in Constancia on the corner of Tower Bridge road and Tanner Street) is now available from a quirky truck that regularly parks up at Canada Water, St Katherine’s Docks, East India Docks, Broadgate Circus at Liverpool Street or many an interesting event around London, serving up quality rump steak sandwiches with Chimi Churri sauce. 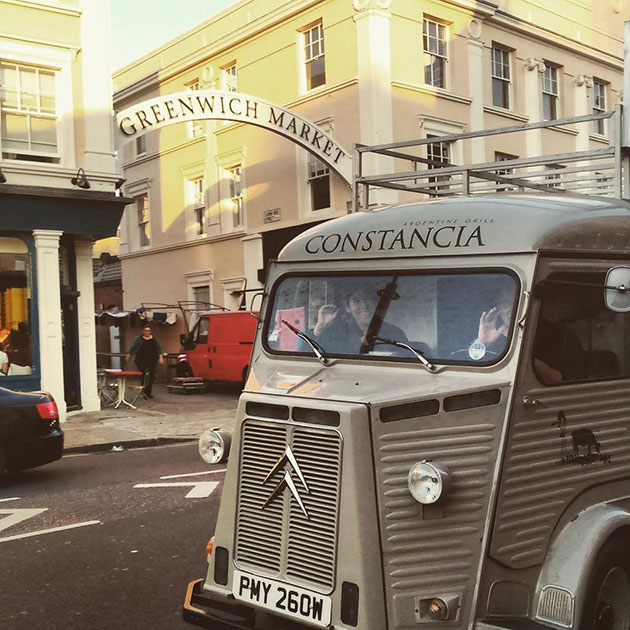 Sebastian Harguindey, the man behind Constancia, described how his ‘on the road’ journey began, “Our first foray into street food was a plot at the Bermondsey Street Festival and soon after we took part in a great local food festival at the White Cube Gallery.“

He added, “The final piece of the puzzle was purchasing our Citroen H Van in France and getting it converted to our spec.“ Funky-looking, the corrugated panelled body work of the Citroen H was inspired by German Junkers (Aircraft) built during the First World War. Constancia have had their’s customised with a full length flap opening up as a serving hatch and a neat preparation kitchen inside.

In addition to rump steak sandwiches the Argentine Grill mobile unit serves up ‘Choripans’, a south American classic crusty bread (‘pan’) packed with chirozo, rocket leaves and red peppers especially popular in its homeland at football matches and with cab drivers. They also serve up a warming lentil stew with chorizo, bacon and vegetables. Not a natural first choice for vegetarians admittedly, but for meat eaters who don’t often pass along Tower Bridge Road this is definitely a mobile feast that’s worth tracking down or booking for your own private party.

To find out where the Citroen H is appearing next
CONSTANCIA ON THE ROAD
www.facebook.com/constanciaontheroad
www.constancia-ontheroad.co.uk 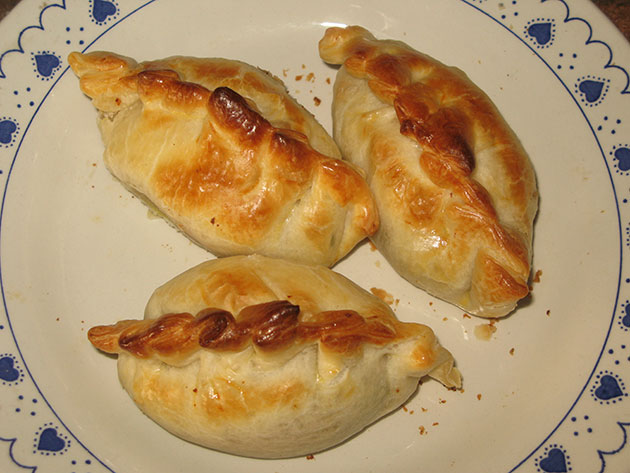 Making the filling
In a large pan, sauté the onions in the oil and butter.
Sprinkle the crushed cube of vegetable stock.
Add the meat and cook until slightly coloured – the empanadas will be baked or fried later, so avoid over-cooking at this stage. Cook for 2 minutes.
Stir in all the spices, the olives and hard-boiled eggs.
Refrigerate, ideally for up to 24 hours.

Making the pastry (you can buy puff pastry sheets to save time)
After the filling has rested, in a large bowl put the flour and slowly add the melted fat or butter mixing it in with a fork.
Put the mixture on a large board and make a mound with a well in the middle. Start adding the salmuera, little by little and then make a ball of the entire mixture which should not be too dry nor too sticky.
Begin kneading the dough until it is smooth.
Form a ball and let the dough rest (covered with a towel) for 15 minutes.
On a floured surface, flatten the dough ball with a rolling pin until it is 3mm thick.
Then cut 12cm circles using a pastry ring or a tea saucer.

Assembling the Empanada
Place a spoonful of the filling is each circle of pastry and then seal them.
Put all of the empanadas on a baking tray, brush them with sunflower oil and
bake them at 200°C for 15/20 minutes until golden brown.