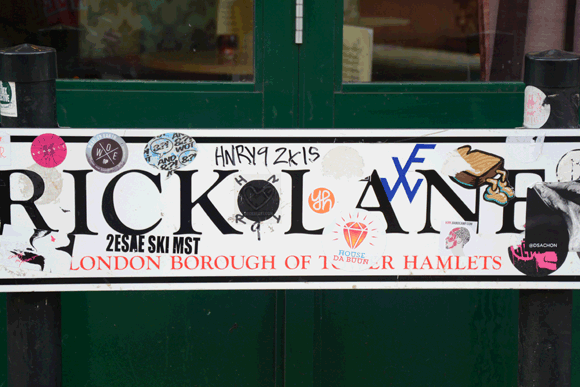 brick Lane has been a part of my life since I was a little girl. My dad used to take me to there every Saturday where he would catch up with his friends who owned clothes shops and food stalls. Standing beside him, trying to pay as much attention as I could, the scent from food stalls would drift into my nostrils forcing me to tug on my dad’s leg and lean towards the direction of the smell.

In the heart of the East End, Brick Lane is easy to get to from central London. The nearest tube is Aldgate East on the Hammersmith and City line. Liverpool Street station is the nearest train station with National Rail services and Shoreditch High Street Overground station is also just a short walk away. Brick Lane runs for about mile from Bethnal Green, through Spitalfields and down towards Whitechapel and you get the full experience when both feet are on the street and walking the steps of thousands. One of the most famous tourist attractions in the East of London, Brick Lane is bursting with culture, food, fashion and art. People flood the busy street looking for great food, clothing and to see the spectacular graffiti work on the street walls.

The street was originally called Whitechapel Lane and is thought to be have been renamed after the bricks and tiles made from the local earth by manufacturers who set up shop in the street back in the 15th century. Two hundred years later, as if anticipating the bars and clubs that would follow in the future, brewing came to Brick Lane; notably, the Black Eagle Brewery founded by the Truman family in 1666. However, aside from the drink, the 17th century brought with it a farmers market (which continues to this day) and successive waves of immigrants. The Brick Lane Market first emerged in the 17th century for fruit and vegetables sold outside the City but the first to make the move to Brick Lane were the French Huguenots escaping from the Revolution who also had a sizeable population in nearby Spitalfields. The East End has always been a haven for immigrants looking for a better life and as London neared the 20th century, Jewish and Irish settlers moved in. 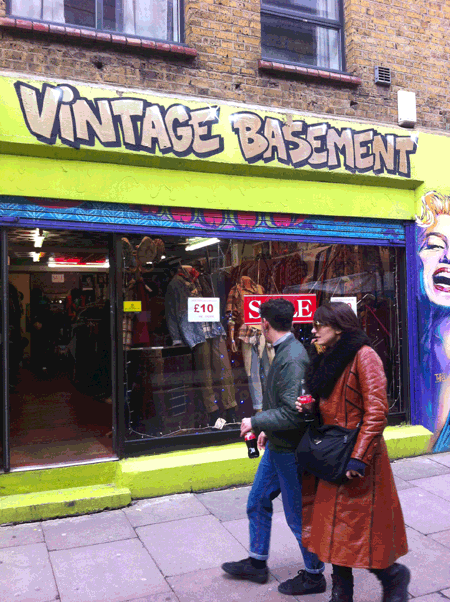 One of the oldest shops in Brick Lane is ‘PRK Blackmans Boots and Shoes’. Started in 1935 by a Jewish man called Phil Blackman, they became the first shop in London to sell Dr Martin’s Boots and it is said that they decided to start a shoe shop in Brick Lane simply because of the growing popularity of the street and “a lot of people means a lot of feet”!

Today Brick Lane has a diverse Sunday market and in 2012 was named ‘Curry Capital’ with over 50 curry restaurants becoming known by many as ‘Banglatown’ because of the number of Bangladeshi restaurants. One of the best vintage places in Brick Lane is the ‘Vintage Market’ shop just after the walk through the curry houses. The underground vintage store has everything from cropped jersey tops to fleeced denim jackets. Shopping in the Lane, with its variety and range of vintage stores and market stalls ensures that you can create your own style at the best prices and at the same time as experience something of the ‘old East End’ and its market traders.

Every time I visit I see or hear something new which I suppose is why I just keep going back; whether its for the shopping, the food or just to hang out watching a film at the indie movie theatre ‘Electric Cinema’ or at the bowling alley. It’s an extraordinary, enriching place. Every side-street contains something of interest but make sure you have good walking shoes on as you’re likely to really use them.