Many young people are not cut out for academic life and find themselves, as teenagers, keen to get out into the working world.

Pathways to maturity for young people mostly lead through expensive courses and have a delayed access to wages. It is not surprising then, or unwise, for 16 to 18 year olds to consider alternatives this summer.

For those that like working with their hands, have an interest in fashion and enjoy dealing with people there are real opportunities to learn a skill, continue to achieve work related qualifications AND get paid. At the end of that particular road, they can look forward to a job, a universally in demand trade and an NVQ. As a community we should be welcoming, encouraging and supporting young people to make such practical and positive steps.

That is precisely what is on offer from the team at Shears Hairdressing Academy based in Catford. They support their young people in finding a placement and give them the opportunity to learn all the skills they will need to be ‘work ready’.

“You will gain an insight into career paths, and move on to the Apprenticeship of your choice. It’s a great opportunity to get the best of both worlds, you gain work experience and a qualification at the same time. What more could you want?” Pauline Booker, Managing Director at Shears, said.

Signing up for an Apprenticeship is free for 16 to 18 year olds and while trainees study for their NVQ they gain experience working in the hairdressing business. 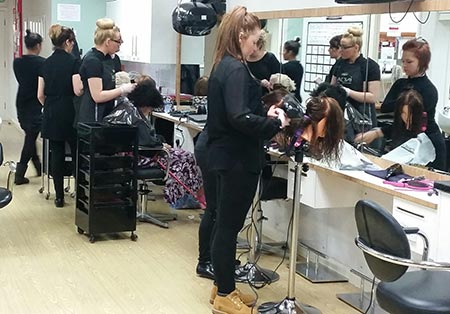 Most of the training takes place at work, with attendance at Shears professionally fitted training salon one day each week, paid at the National Minimum Wage Apprenticeship rate (currently £3.70 per hour). The Shears Academy team is there to help every step of the way, and committed, hardworking individuals can aim to be a qualified Hair Professional within just 18 months. 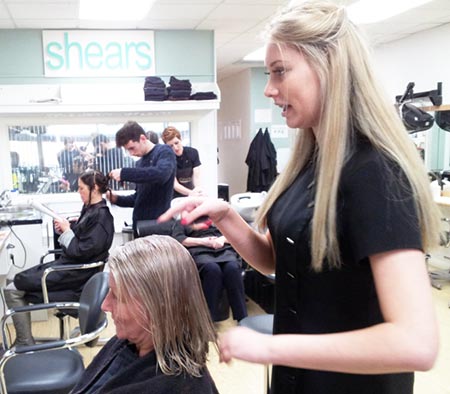 Alice, a success story from the Shears Academy

Apprenticeship Case Study
Alice originally went to a Further Education college on leaving school but she soon discovered it wasn’t really for her. So she decided to work as a junior in a hair salon as her mother is a hairdresser. The salon recommended a Shears Academy Apprenticeship, so she enrolled, attending Shears Academy one day per week and working in the salon for the rest of the week.

Alice used to struggle a bit with English and Maths when she was at school, and had not managed to gain GCSEs. With support and guidance from one to one tutoring at Shears Academy, Alice achieved her Functional Skills in English and Maths, passing with flying colours.

Meanwhile Alice became a mentor to work-experience students at the Academy, and enjoyed helping others learn, passing on the many skills she has developed during her training with Shears.

Alice described the process herself, “Being on an Apprenticeship at Shears Academy is a really great opportunity to gain real work skills and experience – it’s been fantastic for me, and I’m even earning while I learn”.

“It’s really easy to enrol, you just give Carole at the Academy a call and she invites you to an interview. I would recommend Shears Academy to anyone who wants to get qualified in hairdressing or barbering because everyone here makes you feel really welcome!”

About Shears Academy @ SE6
The education team at Shears Academy are experts in hairdressing training; offering a professional salon standard environment with real clients, they teach, motivate, support and inspire young people to reach their full potential and become one of the successful hairdressers of the future.

For more information about training at Shears Academy, call Carole 020 8461 3504