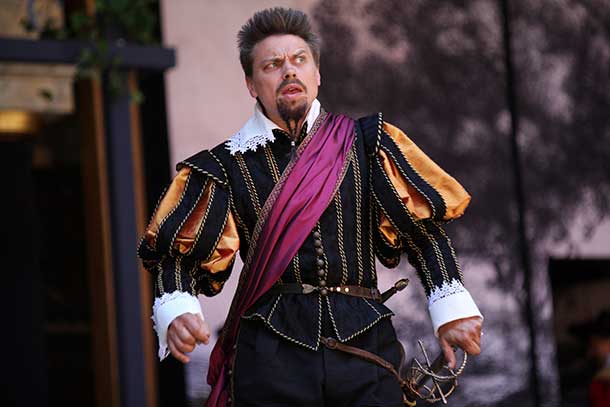 for his ninth season at The Globe James Garnon takes on a particularly challenging role: The Tempest’s Caliban.

A slave to the island, Caliban is referred to as a moon-calf or fish, and portrayed in theatre as a deformed man, half-man, half-beast or even a monster. It’s a role that James has always wanted to play and last year, in an attempt to scratch the itch, he spent two days as Caliban for a BBC Radio production; however rather than satisfy the urge, this  performance left James with a mass of ideas, a half-formed character and a greater itch than ever.

James is no stranger to The Globe, having trodden its boards even in his RADA student days. “Performing here is a world away from the West End experience for an actor,” as James says. “The actors do not play at the audience but very much with them. A performance is affected by many things including the audience’s reaction, the weather or any other elements that come randomly into this outdoor space.”

He explains that plays at The Globe are a shared game: soliloquies are not asides but a chat with the audience. The work is a two-way conversation from which the actor is continuously learning – each day’s performance affecting the next. Performing in broad daylight and just centimetres away from the audience, there’s no hiding from the crowd’s reactions. The ‘cheap seats’ are at the front of the theatre rather than at the back in the gods, plus it’s an open space – so people can walk in and out. This means that the pressure’s on for the actors to keep the crowd engaged and entertained, and if they aren’t, the actors can see it.

The Globe’s standing tickets start at just £5 and bring in a mish-mash of students, tourists and families amongst others. For James, The Globe is the most democratic of theatre experiences, refreshing and inclusive, and he enjoys the rare opportunity of playing to “a crowd of 700 people who’ve just paid a fiver”.

“If you can be subtle and vast in the same sentence, even better 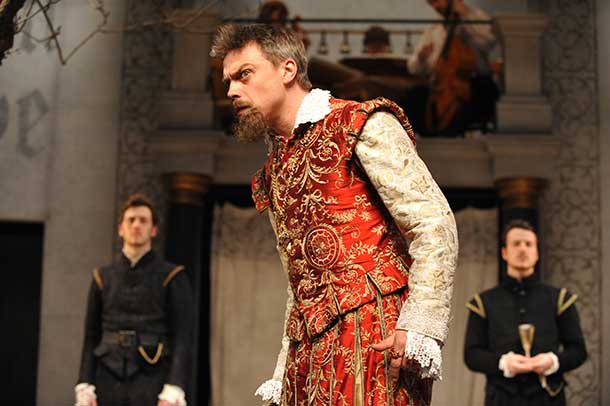 Although having spent many long summer seasons at The Globe, James Garnon has never become typecast. He has achieved this by taking on various tricky and eccentric roles – including spending last year’s season permanently hunched as an 85 year old woman in Richard III and previously having played a Tourette’s-afflicted King James I in Howard Brenton’s Anne Boleyn.

James recognises that small quirks and slight details are often the key to creating a truly fascinating character. He explains that having the capacity to be both subtle and vast, to whisper and roar in the same scene really captures audiences, “and if you can be subtle and vast in the same sentence, even better.”