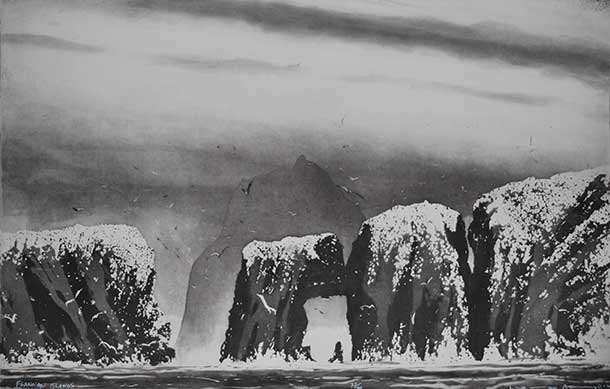 tucked away on a quiet lane beside Bermondsey Street, behind a tall white door dangling a loop of string for a bell, is the home and studio of Norman Ackroyd.

Whilst Norman is one of Bermondsey’s longest standing ‘new’ residents and began etching long before he moved here in 1983, he shows no signs of retiring – still taking the hazardous trips around the British coast which he records simply, but evocatively, in a dramatic greyscale spectrum.

Although fascinated by Britain’s most dramatic coastlines, Norman is a firm urbanite, explaining that he enjoys the contrast of “living ten minutes from the bank of England, while visiting the extreme edges of the British Isles”. He has a particular affinity with Bermondsey in its similarity to his hometown – the factory district of south Leeds – and despite the recent transformation he remains as at home in SE1 as he was when he arrived. Bermondsey seems to have fared Norman well: as we speak he is sporting a luxurious velvet blazer made for him by the local couture label Pussy Willow, and after a morning of etching, he is known to take a leisurely lunch at Jose’s Spanish eatery – a significant alteration to his lunch breaks of the eighties, when “all you could get was cheese and tomato sandwich if you were lucky!” 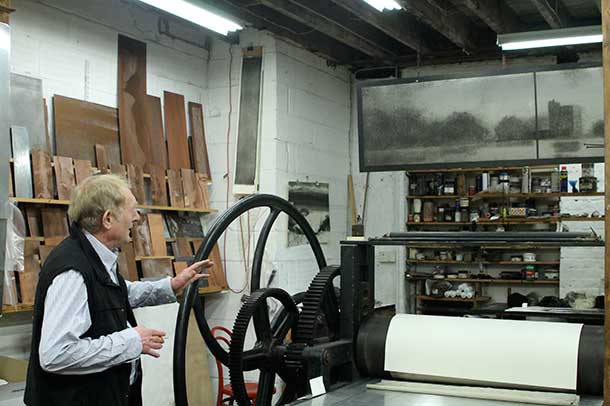 “I always carry a compass

Norman’s adventures are rough and unpredictable, but at home he is regimented: the secret of such a prolific artist. His studios are immaculate, his work categorised and archived by his  assistants.

Norman’s ordered nature is equally reflected in his practice: working primarily with etching and using only black ink in his Victorian copperplate printing studio. He could be described as a purist, finding contentment in these constraints; “it is a little like poetry, being limited to black and white, like a sonnet in which you’re limited to 14 lines. There is a freedom in being limited by the constraints of a medium”. 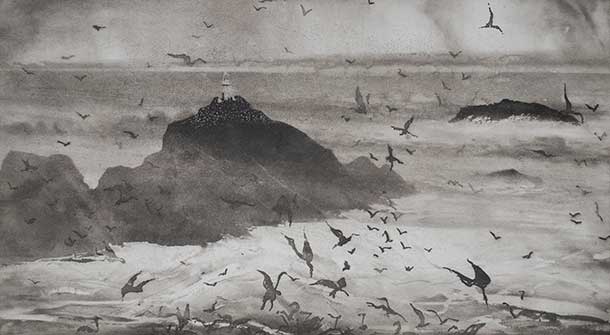 The British Isles will always be Norman’s muse, but he has successfully worked in other, more exotic locations: making forty plates in the Galapagos Islands for a mural on the southern elevation of the new Sainsbury Laboratories for Plant Development in the Botanic Garden at the University of Cambridge.

This artist’s annual adventures lead not only to prestigious awards and beautiful imagery,  but also to an enormous repertoire of brilliantly bizarre stories: of lunching on freshly caught “lobster butties with Chablis”; of Jimmy Macintosh’s refurbished 1950s fishing boat complete with Sat Nav and sonar capable of locating a shoal of mackerel for lunch; of the men of Ness who still sail yearly to the mile-long island of Sula Sgier forty miles north of the Isle of Lewis to harvest two thousand gannet chicks as they have done for five hundred years; and of being stranded on St Kilda when the weather was too bad for the National Trust to pick him up.

Despite travelling to the most diverse locations at the furthest fringes of the British Isles, each of Norman’s expeditions tends to follow a common pattern: a small group of like-minded creatives accompany him as he stands steadily in the boat.

Last year, companionship became collaboration when he and friend Douglas Dunn (“the greatest living Scottish poet” as Norman describes him) travelled to the Shetland Islands. This partnership resulted in the book, A Line in Water, a harmonious coupling of Norman’s small but powerful etchings, and Dunn’s poems which are simple but with a wye humour and a great sense of landscape.

Often admiring others he is by no means insecure. In fact, whilst many artists flit between mediums when times change or problems arise, Norman has complete confidence in his technique and dismissed artistic difficulties as just “the grit in the oyster shell which you do it in spite of”. This grit, this restless niggle is a constant presence in Norman’s practice; the energetic explorer with an infinite excitement, a need even, to find the furthest, the highest, the oldest…

Determination and an absolute love of etching have taken Norman on perilous voyages for almost fifty years, and while he’s certainly no wimp, Norman’s work is more about a passion that drives than grand bravery – casually saying of his working conditions: “you just have to stop thinking about it; you just let your head, your eyes and your heart do it”.

As we stand in Norman’s entrance hallway and prepare ourselves for a lesser great outdoors than he is used to, Norman throws on a heavy wax jacket and fumbles in the pockets.
Ever prepared, he pulls out a pair of aviator sunglasses, a hand-warmer and a compass “I always carry a compass” he says.

I can’t help thinking that the unassuming object gently glinting in his palm has seen more of this country than you and I have, or probably ever will. 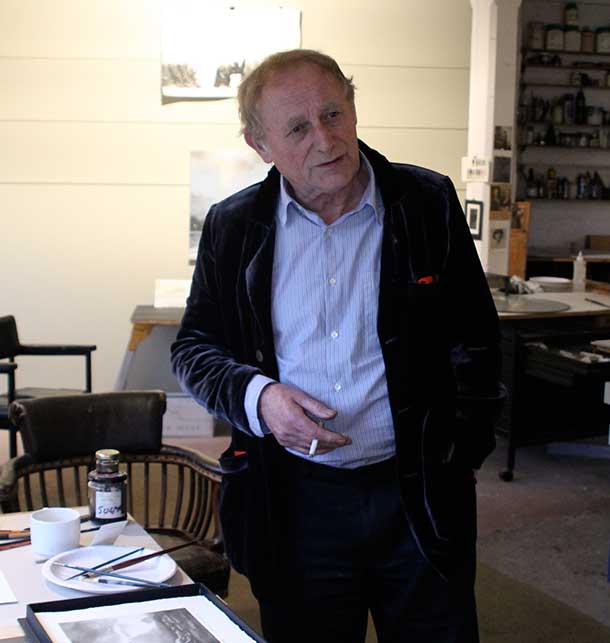