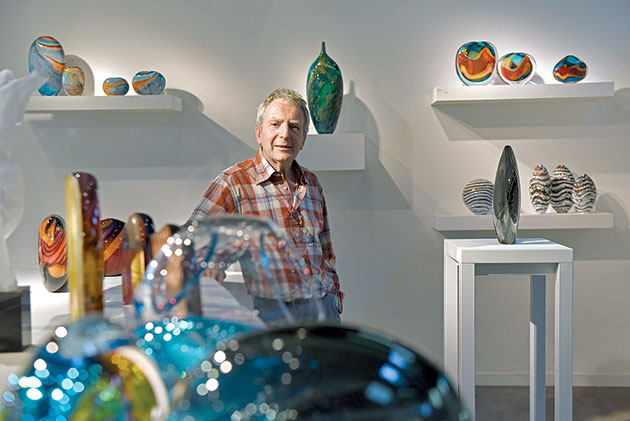 Photo: Mary Turner for The Times

This summer, Peter Layton, founder of London Glassblowing, the UK’s foremost gallery for
contemporary glass art, will celebrate his 80th birthday by hosting a landmark exhibition of established glass artists.

Prior to the 1960s art made from glass was mostly made in a factories using huge furnaces and teams of labourers, but fifty years ago there was a shift in glass production techniques. Sculptures made of glass began to be hand or mold blown by smaller teams employing a new variety of specialised techniques. At first there were issues involving equipment; scaling down huge furnaces to fit a solo artist’s studio, and the chemistry of glass; how to make stable compositions that were uniquely suited to working by hand. This pioneering movement that began with Harvey Littleton in the United States soon spread to Europe and by the 70s British Art Glass (BAG) orgnisations began to appear.

Established by Peter Layton in 1976, London Glassblowing was among the first hot-glass studios in Europe. The studio has a reputation as one of Europe’s leading glassmaking workshops with a particular flair for the use of colour, form and texture. Peter Layton has been at the forefront of the studio glass movement along with fellow makers from that time, Sam Herman, Philip Baldwin and Monica Guggisberg, David Reekie, Alison Kinnaird, MBE. In ‘Celebrating 80’, Peter has invited these illustrious artists to exhibit with him and extended the invitation to a range of established glass artists currently broadening the understanding of the medium, internationally and at home. 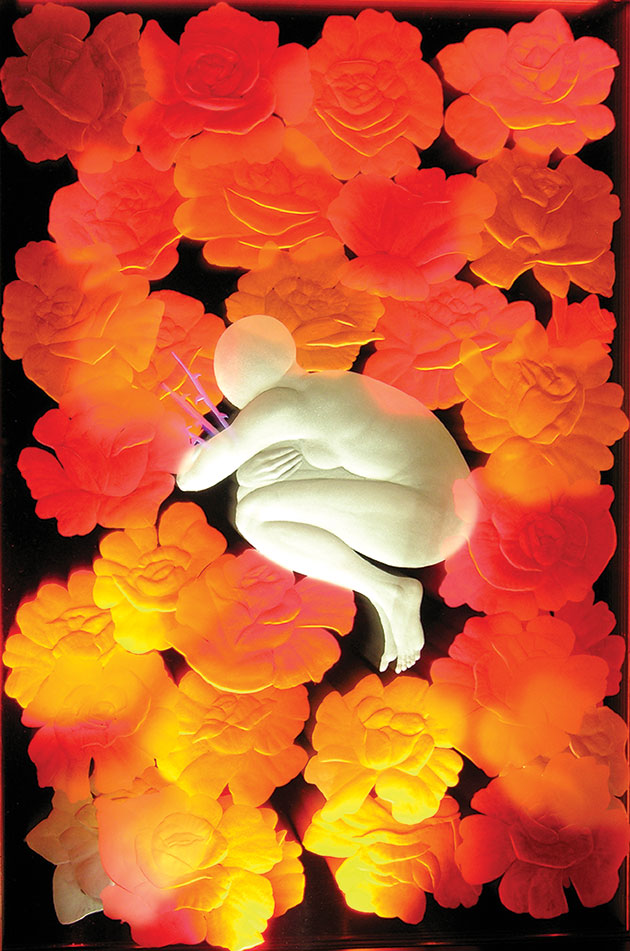 The exhibition will be a rare chance to view the works of the ‘pioneering’ members of the British studio glass movement in one show, alongside artists from the younger generation of established makers. The show runs from the 16th of June to the 8th of July, at London Glassblowing’s Bermondsey Street space and is the major exhibition taking place during the year of celebrations for Peter Layton’s 80th birthday.

‘Upon reaching this age I find myself asked more and more frequently about my legacy, and my reply is invariably undecided,’ explained Peter Layton. ‘London Glassblowing and the incredible things we’ve achieved there together, is of course a major part of whatever it may be. However I am also moved when I think of all the great people who have passed through those doors, each bringing something new and, I hope, taking away something they’ve learned.’

Layton has also pulled from the company of his resident artist team including Tim Rawlinson, Louis Thompson, Layne Rowe, and Anthony Scala for this exhibition. Featuring Rawlinson’s blown and polished forms, and new developments from the others, particularly jewellery by Layne Rowe. Anthony Scala, glassmaker turned filmmaker, will screen a selection of his films made about Peter and the studio during the exhibition’s run.

Visitors to London Glassblowing Studio will experience the heat and magic of the ancient craft of glassblowing while watching a gather of molten glass evolve into a thing of value and beauty.

‘It is my privilege to work with and exhibit alongside the new generation of great glass makers,’ Peter summed up. ‘Whatever my legacy may be, I am confident that the future of British Glass art is in safe hands.’