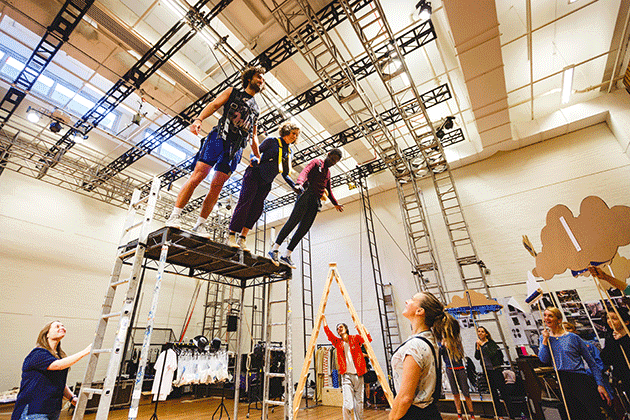 If the more populist shows in the West End and traditional Pantos aren’t for you this year have a look instead at Peter Pan at the National Theatre. Director Sally Cookson brings her inventive version to London after a sell-out run at Bristol Old Vic. Her new approach to the story explores the possibilities and pain of growing up, and is a riot of magic, mischief, music and make-believe.

Also for younger audiences is the return of Baddies: The Musical at the Unicorn Theatre which runs until the end of December after a hugely successful sell-out run last Christmas.

At The Globe the theme of storytelling takes a more mystical twist with a collection of Hans Christian Andersen tales including The Little Matchgirl, The Princess and the Pea and the Emperor’s New Clothes.

Until March next year the National Theatre will house the classic drama, Hedda Gabler by Ibsen featuring Ruth Wilson and Rafe Spall. A masterpiece that has been delivered with a modern approach by director Ivo van Hove, previously celebrated for his recent production of A View from the Bridge.

This year’s four shortlisted artists for the Turner Prize are Michael Dean, Anthea Hamilton, Helen Marten and Josephine Pryde and the winner is announced on 5 December. The exhibition at Tate Britain runs through to 2 January and on Tuesdays entrance is by contribution only. Established in 1984 the Turner Prize has become one of the most prestigious international contemporary arts awards. Tate Britain is also hosting a Paul Nash exhibition until 5 March exploring the surreal and mystical side of the English landscape.

There are very few places in the country, if not the world, where you can wander from gallery to gallery, theatre to theatre in such a short distance and experience this kind of cultural quality.