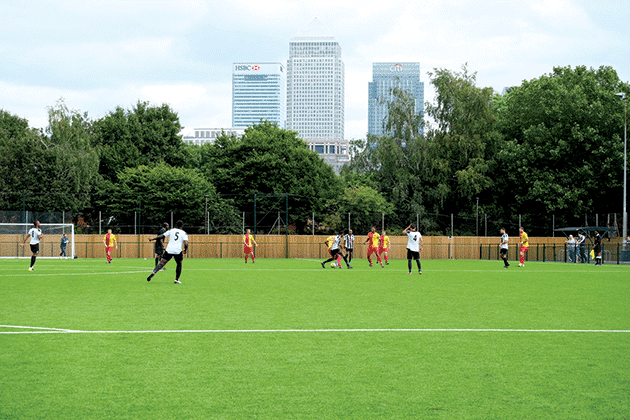 Non-league Fisher FC rose from the ashes of Fisher Athletic when the club was wound up in 2009. The Fisher Supporters Trust took on the mighty task of restoring their local team to its former status and recently returned to play at home in SE16 after a twelve year absence. Their ground, the purpose built St Paul’s Stadium on Salter Road, has a maximum capacity of 2,500 fans and is the result of the collaboration between Southwark Council and Fairview New Homes.

The club (or its previous incarnation) had originally been founded by Michael Culiton in 1908, headmaster at Dockland School, to provide sporting facilities for the underprivileged young men of Bermondsey and took its name from the Catholic martyr Saint John Fisher. It has been a long journey for the club and the people of Rotherhithe, but they have finally arrived home and with the area in a resurgence there is even more hope for the future.

Just a weekend or two after Jose Pizarro visited Whitstable it was Fisher FC’s turn to play away against The Oystermen (Whitstable FC) and the young team gave a performance full of grit and determination. Not yet at their full strength or maturity they failed to beat the home team but Fisher’s young Toyo Adeshina did manage to thump one consolation goal into the back of the Whitstable net, shaking up those oysters!

If you would like to support your local team, lend a hand or sponsor the club you may be surprised at how refreshingly rewarding non-league community football can be. With season tickets priced between £35 to £90 per year it certainly makes a welcome contrast to following big business premier league teams.