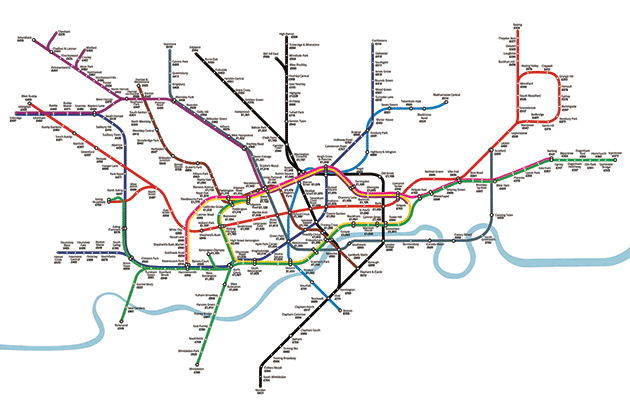 Whether you’re looking for a property to settle down in or a home that doubles as an investment that can be resold to capitalise on market changes, this piece of research might help.

Using the iconic London tube map designed by Harry Beck in 1931, TotallyMoney.com have looked into recent property sales to show prices per square foot around London’s tube stations, making it very easy to compare locations and at the same time see their connectivity across the capital.

Harry Beck was an engineering draughtsman working at the London Underground Signals Office when he first penned the design, knowing that being underground, travellers were not interested in the accuracy of the landscape above. What mattered most was clarity and simplicity so they could easily see the route they needed. Drawing on his own experience of electrical circuits Beck’s design was radical and was only tentatively introduced by the London Underground in 1933. Customers loved it and the design, though modified, has remained in constant use ever since. 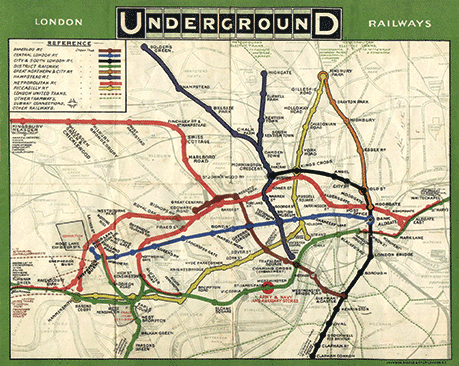 While the area around Borough tube station achieves an impressive £899 per square foot, just yards along Newington Causeway at the Elephant and Castle, the average price is just £672. With massive regeneration going on in that area, that price is likely to soar over the coming years. London Bridge, Southwark and Lambeth North are all similarly priced at a little over £890 per square foot.

Vauxhall is surprisingly well-priced at £731, only marginally more expensive than Bermondsey at £703. Another place of interest and offering exceptional value for money is Canada Water (with Surrey Quays retail shopping and regeneration nearby – and lots of river views) at just £625.

On the north side of the river prices dramatically rise by £100 per square foot in the east and towards the west end rising by £300 to £400.

The research also highlighted some other interesting views of the property market as seen from the graphic.

The tube line with the most expensive average property price, at £1,125 per square foot, is the Hammersmith and City line. This line runs through pricey West London areas such as Westbourne Park and Ladbroke Grove, as well as through areas of the square mile such as Farringdon and Liverpool Street.

The line with the cheapest average property price is the Metropolitan Line – just £504 per square foot. While this line goes right into London’s financial centre, it also stretches out to Amersham in Zone 9, which is actually in Buckinghamshire and so doesn’t suffer from the higher London property prices.

“the tube line with the most expensive average property price, at £1,125 per square foot, is the Hammersmith and City line

Asked to comment on the continued popularity of the local area Eddi Matthiasson, of Williams Lynch Estate Agents, said “With our office on Bermondsey Street we enjoy being in the middle of one of London’s most sought after areas which is also seeing tremendous redevelopment. It’s a magical cocktail when it comes to buying, selling or renting property.

“We’ve seen the increase of both UK based and foreign investment due to the blend of old and new residential properties and the fusion of residential and commercial which makes it a lively, buzzing place to live. Perhaps even more importantly, with the redevelopment of London Bridge, this is likely to continue.”