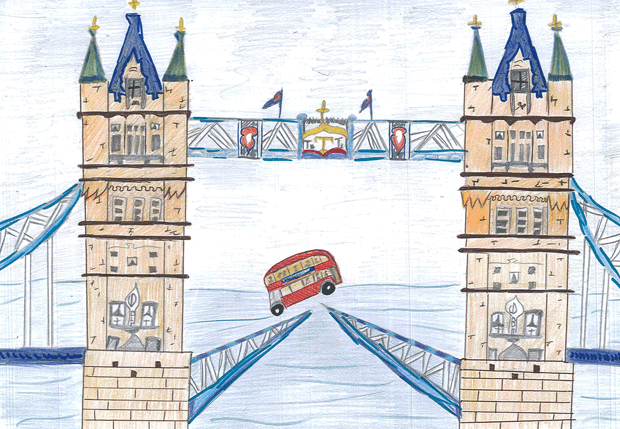 the drawbridges (bascules) of Tower Bridge are raised three or four times a day to let boats, that still enjoy right of way, pass along the river below. Frustrating this may be if you are hurrying north or south, you can rest assured that you are in good company. This persistent priority saw American President Bill Clinton separated from his motorcade in 1997 so sailing barge Gladys could pass by on her scheduled journey.

In its heyday the bascules were lifted more than 50 times a day which means that every ten or fifteen minutes during daylight, traffic would be stopped to allow water vehicles to go about their business on the Thames. But with the ever-pressing pedestrian and car traffic in the city, it is estimated that more than forty thousand people now cross the bridge every day. Still, the right of way belongs in the water but fortunately the demand of river traffic is much reduced.

Tower Bridge is an iconic feature in London’s landscape and helps draw tourists to the city. There is something about it that has come to symbolise London, England and Britishness. Shortly after its construction it was considered by some to be brash and pretentious but has since become imprinted on the minds of people at home and overseas as a reflection of the identity of this nation with a grand, royal and powerful beauty. According to ‘legend’, the bridge became an object of desire to Robert P. McCulloch. In 1968 this US entrepreneur mistakenly purchased the old London Bridge (thinking it was Tower Bridge) only to realise when the shipment of stones were re-assembled at Lake Havasu City, Arizona that he should have been more precise with the bridge name when he was on his shopping trip to London.

“seven years, 31 million bricks and 2 million rivets later, the bridge was officially opened by Prince of Wales and his wife

River crossing was a problem in the late 1800s and a new bridge was called for that would not interfere with river transport below. A competition was opened for designers to submit their plans and the winning design by Horace Jones in collaboration with John Wolfe Barry was unveiled in 1884. Construction began in 1887 and seven years, 31 million bricks and 2 million rivets later, the bridge was officially opened by Prince of Wales and his wife, Alexandra of Denmark on 30 June 1894.

Tower Bridge is more than just a beautiful, stately bridge; it has been a dangerous roller-coaster to some people. Albert Gunton, a bus driver, had the scare of his life on December 30th 1952 as he was driving the 78 bus from Shoreditch to Dulwich when the north side of the bridge began to lift.

Gunton took his and his passengers lives in his hands and sped up, jumping the three foot gap and landing safely on the south side of the bridge. It was quite a miracle that the bus stayed upright and didn’t fall into the Thames, and that passengers suffered only minor injuries. For his quick thinking, skilled driving and courage Albert was awarded £10 from London Transport and £35 from the City of London and the nickname from his colleagues ‘Parachute Gunter’ and ‘Waterwings’!