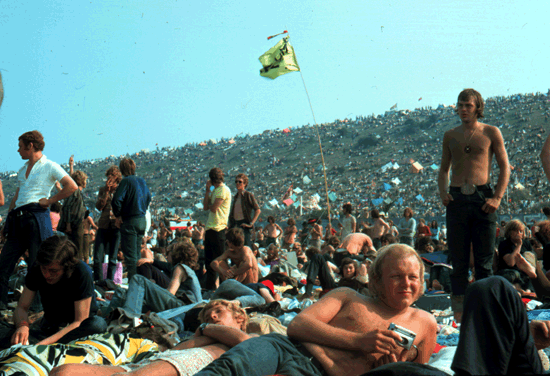 mods, rockers, rollers, hippes, druids and Elvis-lovers… all share some fundamental desire: to head out to a designated special place, especially when the sun or moon comes out, and party. Song, dance and array of rituals specific to the tastes of the group are always central to the event. The practice is international, it’s been going on for thousands of years and I can only assume it answers some primal urge to come together, to commune, to share our lives, our common beliefs and passions with a backdrop of music.

Perhaps it’s a natural exuberance that finds expression when a society is free, at peace and ‘spiritually open’ to enjoy favourite songs together. Monuments like Stonehenge stand as evidence that these gatherings were very serious business even five thousand years ago when the big blue stones were dug out of the rocks of Wales and carried to a clearing hundreds of miles away creating an arena for their festival (originating from the Latin for feast).

Talking of feasts, this year’s Elvis festival will be hosted at Blackpool in July and no doubt thousands of men dressed in white with quasi-spiritual seriousness will gather and sing in low bass notes. A multitude of animals will be consumed and alcohol will flow freely, just going to prove that although the songs have changed and even the chief priests, essentially the human need has not.

More than one-hundred and fifty thousand people (150,000!) attended the Glastonbury festival last year and all time ticket sales have exceeded £325 million – considering ticket prices were just £1 in the first year it’s easy to see how far ‘the business’ has come. The perimeter fence is now 8.5 miles long and to get in costs a minimum of £225. But perhaps there was always a charge to get into these things, even back then when it all kicked off in Stonehenge at Solstice time.

Fortunately, the choice these days of well-organised and quality events is pretty big so there is no need to fight your way into Glastonbury which has become so large the hippy ‘love’ vibe is distant and a regulated markeplace has stepped in. Micro events, resembling the humble beginnings of these feasts, have popped up nationwide and there is something for everyone’s taste.

Whatever your plans are for the summer we thought it would be nice to list some standard, some bizarre, some off-the-wall cultural gatherings that are taking place around the country.

Festivals to look forward to this year

Glastonbury Festival, Pilton, Somerset: 22-26 Jun 2016
Headliners in 2015: Florence and the Machine, Kanye West, The Who
Massive artists, music, circus and theatre shows at this legendary event.

The Great Escape, Brighton, Sussex: 19-21 May 2016
Headliners this year: Oh Wonder, Shura, Mura Masa
Seaside sounds, with 400 bands in 35 venues and one wristband that gets you into every one.

Isle of Wight Festival, Newport, Isle of Wight: 9-12 Jun 2016
Headliners this year: Queen + Adam Lambert, Faithless, Stereophonics
Reincarnation of one of the UK’s first-ever festivals pulls in the world’s biggest talent. This year headliners include Fleetwood Mac, The Prodigy, The Black Keys and Pharrell Williams.

T in the Park, Strathallan Castle, Perthshire, Scotland: 8-10 Jul 2016
Headliners this year: Kasabian, Avicii, Noel Gallagher’s High Flying Birds
Rock, pop and dance as a ‘rite of passage for young Scots and a ritual for older ones’.

Upton Blues Festival, Pubs and Streets of Upton upon Severn, Worcestershire: 15 -17 July 2016
Set in the beautiful Worcestershire riverside town of Upton upon Severn, Upton Blues Festival has grown from a small event in a couple of pubs into a festival that swamps the town with many thousands of music fans, two main stages, an acoustic stage and ten pub venues creating over 100 performances in three days.

Wilderness Festival, Cornbury Park, Oxfordshire: 4-7 Aug 2016
Headliners in 2015: Björk, Ben Howard, George Clinton
One of the more elegant gatherings Oxfordshire’s Wilderness Festival is a banquet feast, a science lecture, a soak in a hot tub, with Shakespeare to boot.