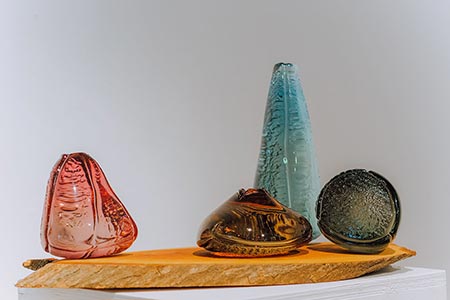 When artists Louis Thompson and James Devereux were invited to the Maldives it was an offer they couldn’t refuse.

Each year Soneva Fushi Resort invites a small selection of top international glass artists to make work in their workshop and contribute to the burgeoning glass scene in the Maldives.
The artists created pieces for a private view at the end of their residency and will present a flavour of this at London Glassblowing on Bermondsey Street in their ‘Latitude’ exhibition during June and July.

“We felt incredibly privileged to have been invited to participate in this residency programme. Working at this remote studio was an extraordinary creative journey, in an environment rich in pure natural wonders,” says Louis.

“We found out at short notice that we were going to the Maldives. I was flabbergasted that they wanted to take a punt on us,” added James.

Two flights and one boat ride later, Louis and James were given free rein to see what might emerge from their residencies. They both developed existing threads in their work and let the environment of their tropical surroundings influence the resulting pieces. Their three week residency included snorkelling on the coral reef, sailing and scuba diving to explore the sea life.

“The island is a constant source of wonder. The colours defied belief and they are the inspiration behind the works we produced,” said Louis. It might sound like a relaxing holiday but it was far from it.

“We spent half a day working solidly and the heat was intense, explained Louis. “We did a three hour stint and rested for a few hours – a quick plunge in the sea to cool off! It was the hottest studio we have ever worked in but it was so rewarding. We both felt an overwhelming pressure to produce amazing work which could be used in a private view at the end of the residency.”

The Bermondsey exhibition will feature vibrant colours and patterns depicting a sense of nature and underwater life, explained Louis.

Louis and James met at the Royal College of Art where James worked as a glass technician from 2009 to 2013. It was here that James received wide acclaim for his hot chipped technique used in his Clovis pieces. Louis has more than 25 years experience of working with glass. His blend of concept and technical skill has won him the Jerwood Makers Prize Commission and the Best Exhibit Prize at the British Glass Biennale. In 2016 he completed two large scale installations at Salisbury Cathedral and he continues to exhibit his work internationally.

This was the first time the pair brought their works together in the same exhibition. “It was comforting to work together, we could share and discuss technical aspects of the process,” added James. “It really made us think about glass in a different way, considering why it is so special and how it is a material that can be recycled.”

How do they think audiences will respond to their work?

“We want to bring a bit of the Maldives to Bermondsey so we hope the exhibition has a different feel to normal shows. We have thought about how we could present this differently. We want to invite debate and we hope people will enjoy it and feel the influence of where we were,” says Louis.

The duo may have interpreted their experiences in different ways but both artists vehemently agree on the power of glass.

“I was completely mesmerised and hooked when I started working with glass,” says Louis. “I know the material is a challenge no matter how much knowledge I acquire. It’s magical and surprises me – even after 30 years. Working with glass is complex and it has been a difficult road to get to grips with but I wouldn’t work with any other material.”

James ends: “There are so many unknown variables from a creative point of view and you can create something so new. I’ve found that many contemporary glass artists fall into this and become hooked. You can find so many ways to manipulate it. It’s a truly mysterious material.”

The Studio will be holding demonstrations on 23 June and an evening talk will take place on 5 July.