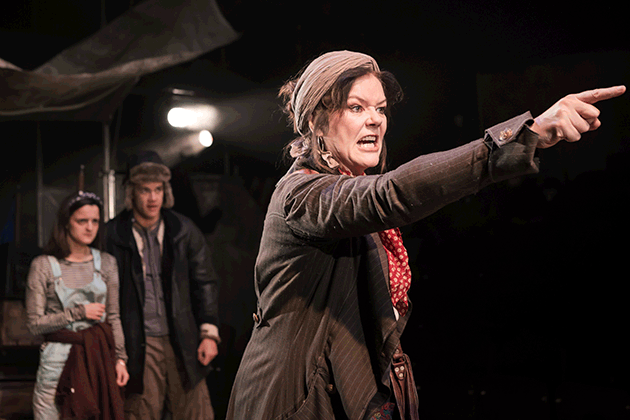 Josie Lawrence is principally known to most of us as a comedy performer but it’s surprising to see just how many serious roles she has behind her, dating all the way back to the mid 80s in both TV and theatre.

Born in the midlands she first joined the Barlow Players in Oldbury when she was just 16 years old. Ten years later, while performing at the Donmar Warehouse in Songs for Stray Cats, she crossed paths with Jim Sweeney and discovered her significant talent for improvisation.

One night during an after show stay-behind, the audience were invited to throw ideas at the performers and Lawrence proved to be as naturally quick and inventive as the best. Soon after she joined The Comedy Store Players and appeared regularly on the new Channel 4 show Who’s Line Is It Anyway?

Innovating and reacting to the shifting sands of her environment was easy for Lawrence, always entertaining and winning the support of the crowd around her. ‘Canteen Anna’, A.K.A. Mother Courage, the complex creation of Bertolt Brecht, is also a woman surviving by her wits in a turbulent war-torn world, steering her caravan of goods and children beside the troops of soldiers spreading across Europe in the 1620s.

But the price to pay for making her living so close to the front line is high; one by one Mother Courage’s children are swallowed up in the tragedy of conflict. Lawrence is feisty and maternal in one moment, sexy and persuasive in the next. This Mother Courage is loaded with the personal qualities needed to survive each day; haggling with soldiers and clinging on to her children with her fingertips pulling them back from the whirlpool of war. Her humanity is stretched and twisted in the process and Lawrence is expert at keeping the audience if not on her side, at least understanding the trade offs she is having to make. As years pass, Mother Courage becomes accustomed to the horror of the landscape and the compromises it forces on her. Death and loss have become normalised, profiteering is guilt-free.

It’s a performance by Lawrence that dispels any myths that she is a comedienne only and presents her loud and clear as a serious actor that can bring humour and pathos, weakness and strength to the stage. 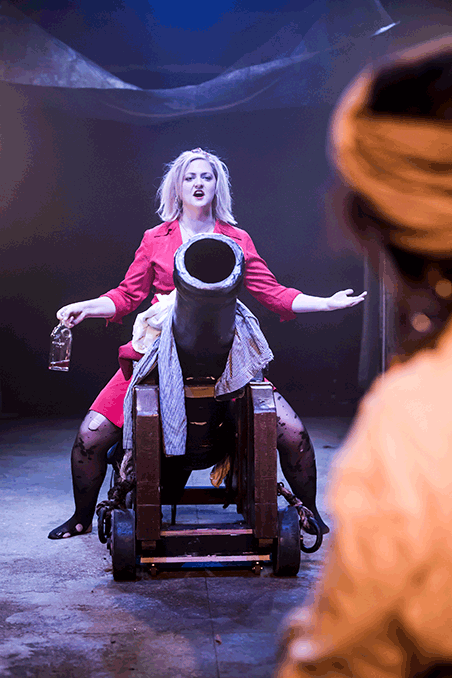 The small group of players that support Lawrence’s electric performance are also impressive with stand out performances by Laura Checkley as a brassy prostitute who owns the stage when she is on and injects scenes with light hearted dialogue and high energy. Perhaps the most surprising performance of all emerges from Mother Courage’s mute daughter played by up and coming actor Phoebe Vigor. 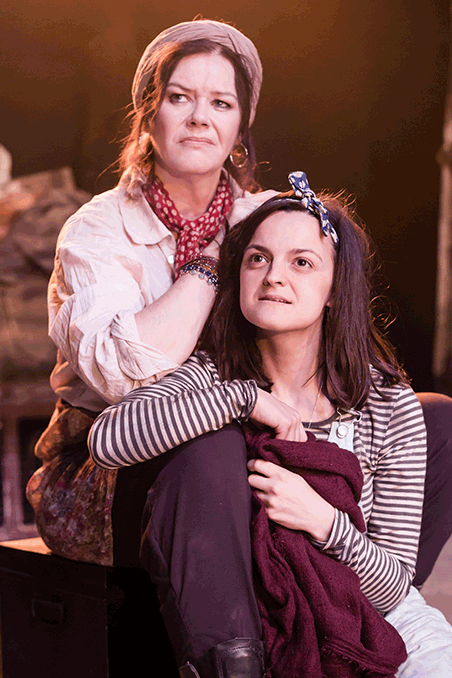 The role, without any spoken lines, is predominantly physical before the interval, but as the play develops so does Kattrin, dragged closer and closer towards the crushing wheels of conflict. With just a range of yelps and soulful wails like a damaged animal, Vigor manages to connect with the audience and communicate the fear and anxiety that possesses her. A powerful performance from a young actor who has just finished touring with the Bristol Old Vic and National Theatre production of Jane Eyre, understudying Jane.

All round it’s an evening full of entertainment, humour and reflection on how the innocent are either numbed, maimed, killed or corrupted by war and though written by Bertolt Brecht eighty years ago seems unexpectedly fresh and relevant today.