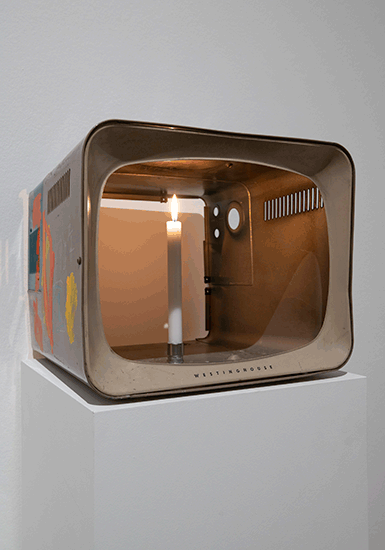 This is a genuine antidote to the grandiose but ultimately one-string ‘blockbusters’ on offer in the capital at the moment. There’s no space for a ‘So What?’ response to this intriguing showcase of a multifaceted visionary who questioned the very notion of boundaries.

A pioneer of video art, a “synaesthete” and above all else, an anarchic optimist of humorous abandon, cartoonish tendril-like cats eyes help us navigate, as we lurch towards Tinseltown.

No ‘virtuous pretences’ here, just a lone candle inside a television shell providing a nativity as we enter the show and light the touch paper. Taking “Gesamtkunstwerk” up a notch, he recruited “Big Perplexers” to join with him: the likes of John Cage and Josef Beuys (a previous gatecrasher!) and various pop entities to involve themselves with his (and the world’s) first “Electronic Superhighway” (a term first coined by Nam June Paik).

He has given his pianos a pasting in an homage to Cage and in return Beuysie clumps one of his pianos. Heady days – Schadenfreude-free slapstick is sometimes the medium for the scrutiny of a cosmetic cosmos.

Innovations and insights galore litter the floor of this challenging exhibition – from resting robots to restless TV screens, we are taken through chapter after chapter of engaging events and performances. Far too many to mention. 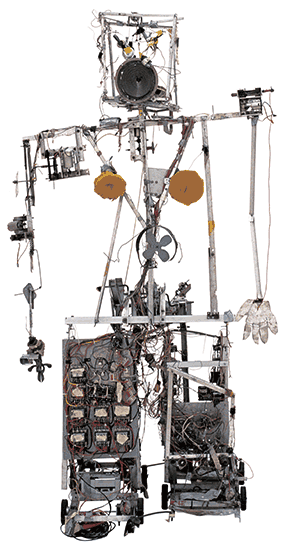 Or, in the eloquent words of Smithsonian’s Michael Mansfield, “It’s an amazing amount of stuff.”

Paik took inspiration from the technology of the moving image and foresaw, and in part experienced, the exponential growth of digital media and its effect on society: Buddha’s TV Selfie, Nixon’s duplicity as art and more “unknown unknowns” made visible for all to see.

There were no “happy accidents”, only accidents that made Paik himself happy. From privileged pianist in Korea to musicologist in Japan and then onto Germany encountering Cage, Stockhausen, Beuys and other “Fluxsters”, Paik’s journey ended in Miami, Florida in 2006.

In a binary world of isolationism Paik’s global celebrations of connectedness, albeit of the perplexing type, offer an antidote to the vainglorious vacuousness and the renewed zeal for walls.

A wonderful day out.

The exhibition runs until 9 February at Tate Modern.

Ps. After Paik’s “All-You-Can-Eat” fest you might want a lie down before you return to Tate Modern for yet another wonderful but very different exhibition – this time of Dora Maar.