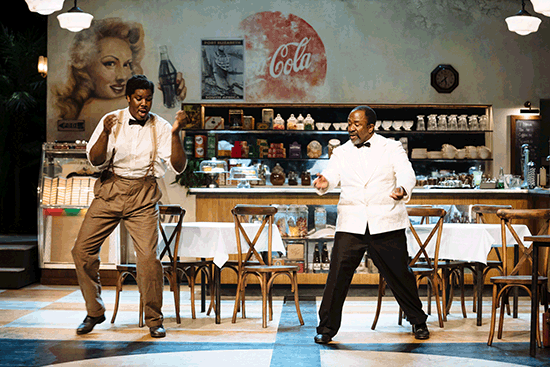 ‘Master Harold’…and the boys, at the National with Hammed Animashaun and Lucian Msamati (Photo by Helen Murray)

Pinocchio – No Strings Attached! (To 11 January)
by Jon Bradfield and Martin Hooper
Geppetta, a lonely puppet maker, crafts herself a young man out of wood. But when a magic spell brings Pinocchio to life she gets more than she bargained for. So begins a great adventure on land and at sea, about a gay young man with a peculiar affliction: whenever he tells a lie, something very embarrassing happens.

The Lion, the Witch and the Wardrobe (To 2 February)
directed by Sally Cookson based on the novel by C.S.Lewis
Step through the wardrobe this winter into the magical kingdom of Narnia for the most mystical of adventures in a faraway land. Join Lucy, Edmund, Susan and Peter as they wave goodbye to wartime Britain and say hello to a talking Faun, an unforgettable Lion and the coldest, cruellest White Witch. 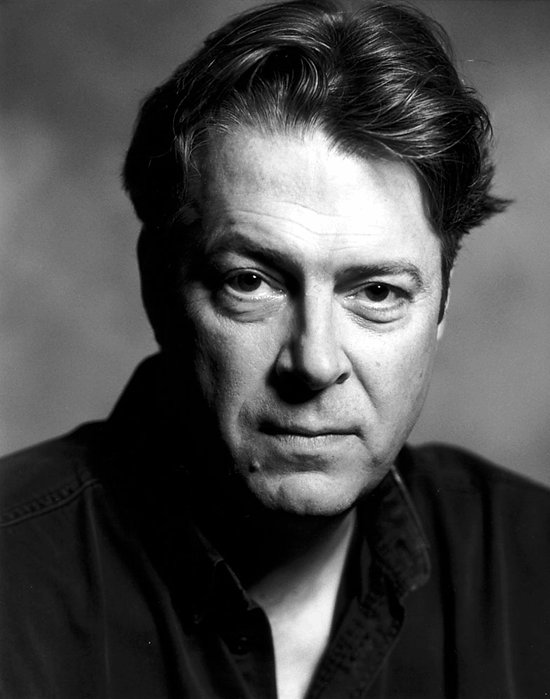 A Number (14 February To 14 March)
by Caryl Churchill
How might a son feel to discover that he is only one of a number of identical copies? What happens when a father is confronted by the results of an outrageous genetic experiment? In Caryl Churchill’s thrilling drama, which won the 2002 Evening Standard Award for Best Play, Roger Allam plays Salter, the father. Colin Morgan plays all his sons.

The Boyfriend (To 7 March)
by Sandy Wilson
Sandy Wilson’s all-singing all-dancing love letter to 1920s musical comedies returns for the first major London revival in over 10 years. Set in Madame Dubonnet’s finishing school in the south of France, these perfect young ladies burst into song at the least provocation, and forbidden boy friends are forever popping through the French windows to sing and dance with them.

‘Master Harold’… and the boys (To 17 December)
by Athol Fugard
St George’s Park Tea Room, Port Elizabeth, 1950. On a long rainy afternoon, employees Sam and Willie practise their steps for the finals of the ballroom dancing championship. Hally arrives from school to hide out in his parents’ tea room. These two men have been unlikely best friends to Hally his whole life. But it is apartheid era South Africa: he’s Master Harold, and they are the boys.

Three Sisters (To 19 February)
by Inua Ellams (after Chekhov)
Owerri, 1967, on the brink of the Biafran Civil War. Lolo, Nne Chukwu and Udo are grieving the loss of their father. Months before, two ruthless military coups plunged the country into chaos. Fuelled by foreign intervention, the conflict encroaches on their provincial village, and the sisters long to return to their former home in Lagos.

My Brilliant Friend (To 18 January)
Adapted by April De Angelis from Elena Ferrante’s Neapolitan Novels
When the most important person in her life goes missing without a trace, Lenu Greco, now a celebrated author, begins to recall a relationship of more than 60 years. Even as life repeatedly tries to pull them in separate directions, they remain inextricably bound to one another.

The Ocean at the End of the Lane (To 25 January)
adapted by Joel Horwood
Returning to his childhood home, Alex finds himself standing beside the duck pond of the old Sussex farmhouse where he used to play. He’s transported to his 12th birthday, spring half term. When his dad was struggling to make ends meet and his friend Lettie claimed it wasn’t a pond, but an ocean… Recommended for 12+ yrs.

The Visit (From 31 January)
based on the play by Friedrich Dürrenmatt adapted by Tony Kushner
In the town of Slurry, New York, post-war recession has bitten. Claire Zachanassian (Lesley Manville), improbably beautiful and impenetrably terrifying, returns to her hometown as the world’s richest woman. The locals hope her arrival signals a change in their fortunes, but they soon realise that prosperity will only come at a terrible price.

The Welkin (From 15 January)
by Lucy Kirkwood
Rural Suffolk, 1759. As the country waits for Halley’s comet, Sally Poppy is sentenced to hang for a heinous murder. When she claims to be pregnant, a jury of 12 matrons are taken from their housework to decide whether she’s telling the truth, or simply trying to escape the noose. With only midwife Lizzy Luke prepared to defend the girl, and a mob baying for blood outside, the matrons wrestle with their new authority, and the devil in their midst.

Henry VI (To January 26)
by William Shakespeare
An England divided under a weak leader spirals from political unrest to all-out civil war. Allegiances are sworn and murderous factions fight for power, but with only one crown for the taking, who will be left standing to lead the country? Experience the Wars of the Roses like never before in this dynamic production which sees Shakespeare’s Henry VI condensed into one epic event.

Richard III (To January 26)
by William Shakespeare
The battle scars from the Wars of the Roses are yet to heal but that’s not going to deter power-hungry Richard. The crown should be his and no one is going to stop him from getting it: not the King, his own wife, or the Princes in the Tower. Richard’s reign of terror is about to begin and Shakespeare’s monstrously charismatic villain wants you there for the ride.

Potted Panto (To 11 January)
by Daniel Clarkson, Jefferson Turner, and Richard Hurst
Seven classic pantomimes in eighty hilarious minutes! In a madcap ride through the biggest stories and best-loved characters from the wonderful world of pantomime, our dastardly double act dash from rubbing Aladdin’s lamp to roaming the golden streets of Dick Whittington’s London and making sure that Cinderella gets to the ball. It’s all unmissable fun, whether you’re six or 106.

Superstar (To 21 December)
by Nicola Wren
Nicola knew from very early on that if she wanted her four siblings’ approval then she would need to impress them, so she set out to become a superstar. But what happens when one of her siblings genuinely does become a superstar? With Chris Martin of Coldplay as her older brother, how long can she fight to stay out of his shadow? How can she prove to her siblings, the world and, eventually, herself, that she is enough in her own right?

A Christmas Carol (To 5 October)
by Charles Dickens, adapted by Jack Thorne
The Old Vic’s A Christmas Carol fills the auditorium to the brim with mince pies, music and merriment. A unique staging immerses the audience in this uplifting story. Recommended for ages 8+.

Fairview (To 18 January)
by Jackie Sibblies Drury
It’s Grandma’s birthday and the Frasier family have gathered to celebrate. Beverly just wants everything to run smoothly, but Tyrone has missed his flight, Keisha is freaking out about college and Grandma has locked herself in the bathroom.